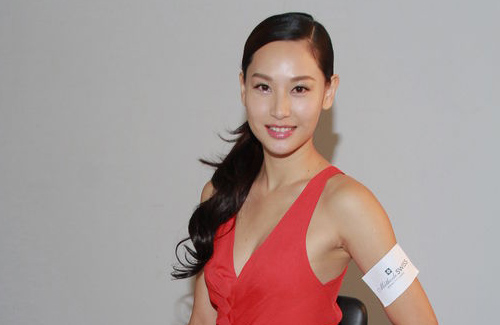 Kate Tsui (徐子珊) recently took a brief break from shooting her drama to film a commercial for Methode SWISS, a skincare brand. It is Kate’s sixth year endorsing the brand, and Kate revealed that Methode SWISS have supplied her with an unlimited amount of products to use over the years. “The pay is also getting better,” Kate remarked with a laugh.

Rumor mills have been churning the wrong way for Vanessa Yeung (楊崢), who is currently dating Kate’s good friend Bosco Wong (黃宗澤). Kate expressed her support for the couple, “As long as Bosco is happy.” Kate added that she is not familiar with Vanessa’s rumors, explaining that she has been busy shooting her drama The Battle of Tomorrow <再戰明天>. “I’ve been caught up with filming so I haven’t been in touch with the reports, but I really think that dating should be something between two people, and as long as they are communicating well then there shouldn’t be a problem. I really don’t have anything else to say about other people’s relationships.”

Kate said that she will support them as long as Bosco and Vanessa are happy. Asked if Bosco had introduced her to Vanessa yet, Kate said, “I am not his parent. We only see each other occasionally at work.”

When the time comes, would Kate choose to announce her own relationship or wait until the press discovers it? “I think it really depends on the partner and how he feels about it. I am in the industry, but if I were to marry someone who isn’t, we would have to consider how that person feels about it. As long as you communicate well with your other half, then it doesn’t matter when you announce your relationship.” Kate also said that she did not feel as if Bosco and Vanessa had announced their relationship too early, repeating, “As long as they’re happy!”