Joey Law (羅天宇) and Katy Kung (龔嘉欣) shared their thoughts on the success of the currently airing Hong Kong Love Stories <香港愛情故事> at yesterday’s promotional event for the drama. The two leads expressed their dismay at the positive response and supported the idea of a second season to the series.

Katy exclaimed, “I really want [there to be a sequel]! The whole team filmed together very happily.” 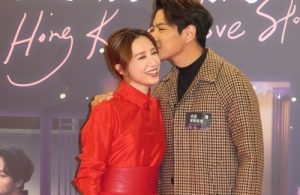 However, she said she hopes there will be zero bed scenes because she’s afraid of intimate scenes. She joked, “I saw everything already, so I’m bored. I don’t want Joey anymore! I’m just kidding. Actually, I know he took to heart that the role of the male protagonist didn’t belong to him at first, but I think the casting was right, so the second season must have him too!”

Joey admitted that he only found out that he wasn’t the first choice for the role a few days ago. He added that he has no idea who the original actor was supposed to be, but he didn’t overthink it, as he did his best to play the role. As such, he is in the running for three awards – Best Actor, Most Improved Actor, and Favorite Male Character – at next month’s TVB Anniversary Awards. Joey frankly expressed that it feels like a dream.

“I don’t dare to think too much, but it is an affirmation for myself,” Joey shared. “My mom sends the [voting] link to people daily, telling them to click my name.”