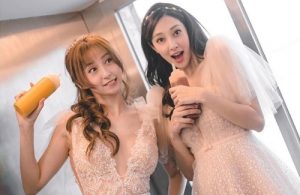 Katy Kung‘s (龔嘉欣) hard work in the industry for the past 13 years has been paying off lately, especially with her well-received performance as the Dark Angel in Death By Zero <殺手>. Though her career is prospering in the right direction, she has not had the same luck with her love life. There are speculations that Katy broke up with her rumored boyfriend Bryan Chiu (趙勇康), making Katy the only single member of “The Housewife Alliance” clique, as Grace Chan (陳凱琳), Zoie Tam (譚凱琪), and Jess Sum (沈卓盈) are all married.

Since last December, there were rumors that the young actress was secretly dating 30-year-old Bryan, a wealthy Malaysian heir, and that he sponsored her hot pot restaurant business. Though she never admitted to their relationship, many signs led people to believe the news. Not only was Bryan present on the opening day of her restaurant, but she also sat right next to him at his birthday celebration.

Sources indicated that Katy was very invested in this relationship and gave up work opportunities to be with Bryan in Malaysia for prolonged periods. Hence, Katy only agreed to star in the 12-episode drama, Hong Kong Love Stories <香港愛情故事>, and Barrack O’Karma 2 <金宵大廈II>. Reportedly, producer Joe Chan (陳維冠) wanted to cast Katy as one of the leads in Seven Princesses <七公主>, but she only agreed to a guest role in the end.

Despite limiting jobs to focus on her love life, Katy may have called it quits in the relationship. Although Bryan was very considerate toward Katy and showered her with gifts like a sports car and a personalized license plate with their first initials “KB” when they first began dating, a lot of women have been surrounding him, given his wealth. It was a deal-breaker for Katy, who has been busy filming in Hong Kong, so she painfully ended their relationship of nearly a year.

Katy’s love life has always been a hot topic ever since her high-profile relationship with Patrick Tang (鄧健泓) ended. Though the two were speculated to be living together, their relationship ended after two years. After the breakup, Katy did not do well emotionally and lost a lot of weight. At one point, she only weighed 95 pounds. Luckily, she was able to overcome the heartbreak.

Afterward, she was linked with many other male artistes, including Kelvin Kwan (關楚耀), Jack Hui (許家傑), Sammy Sum (沈震軒), and Owen Cheung (張振朗). However, she never confirmed the status of any of those relationships. Her fans only hope that she will find her Mr. Right soon.