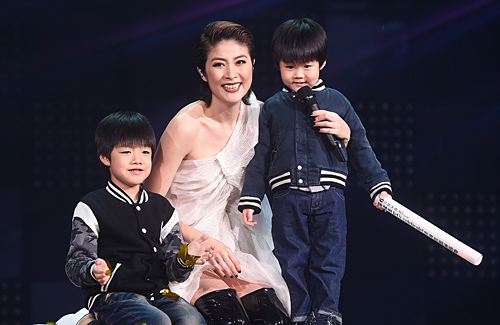 Next year Kelly Chen (陳慧琳) will be celebrating a milestone of 25 years in the entertainment industry and she is planning on holding a special concert. Kelly made her debut in 1995 and has had a very successful career, rising to the status of Cantopop Queen. As a mother of two children, Kelly has always been focused on education of the next generation. She established the Kelly Chen Children’s Charity Foundation (陳慧琳兒童助學基金會) in 2002 and has since helped build over 50 schools in China earning her the nickname: “Female Louis Koo (古天樂)” as Louis is also known for his charitable actions.

On her charity’s website, Kelly wrote: “How do we determine whether we are born with natural inclinations towards kindness or evil? Many people’s personalities and values are affected by experiences from childhood. I feel that we must focus on the education of the younger generations if we want people to live their best lives and to improve society. As a public figure, I hope to act as a role model and try my best to help inspire others.”

Over the years, Kelly has committed herself to charity. In 2005, Kelly donated 440,000 RMB to 100 students from China, sponsoring them for one year of schooling. In 2010, after the Yushu earthquake in Qinghai, she participated in a charity concert and donated 500,000 RMB in her son’s name. She has also donated 300,000 RMB received from attending a brand’s grand opening event.

In 2016, Kelly received the honor of being the female celebrity to act as China’s anti-drug ambassador. Over the past few years, Kelly has also been holding second hand sales of her clothing with proceeds going towards her charity.