They say you never forget your first love, but unfortunately, you may not always be walking your life path with that same person. However, there are several lucky celebrities who married their first love. 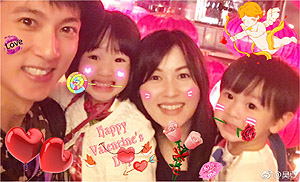 Known as a great guy, Wu Chun (吳尊) fell in love with his wife, Lin Liying (林麗瑩), when he was only 16 years old. Since Liying wasn’t from the entertainment circle, Wu Chun tried to protect her from the public eye by having a private wedding in Brunei in 2009.

Though his wife has managed to stay away from the cameras, it didn’t stop her from being the woman behind Wu Chun’s success. In 2013, they had their first daughter, Neinei, followed by a son, Max. The children both appeared on reality show, Daddy Where Are You Doing <爸爸去哪兒> Season 5, and Wu Chun’s fatherly image definitely captured the hearts of his fans.

Wu Chun and Liying have been in love for 23 years and their happy family of four is definitely a fairy tale in itself! 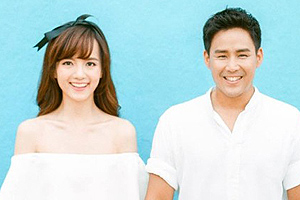 Hong Kong actress, Anjaylia Chan (陳嘉寶), first started dating at the age of 23 when she met her 31-year-old boyfriend, Epaphras Wong (黃頌祈), at church. As Christians, both swore an oath to celibacy. Finally after four years of dating, the two got married. After just one year of marriage, she announced her pregnancy with their first child.

As a faithful Christian, Grace Wong (王君馨) also swore an oath to celibacy prior to marriage. She met her now husband, Daniel Zhang, in the United States when they were only 17 years old. Though they did break up in between, they got back together in 2013 and experienced 11 years of dating before finally tying the knot.

The two held their beautiful wedding in New York in June of last year. Daniel is definitely a wonderful husband who sacrificed his career in New York and relocated to Hong Kong to support his wife’s acting dreams. The couple’s love is often seen in Grace’s Instagram.

Karen Mok (莫文蔚) met her German husband, Johannes Natterer, in Italy during their school years at the age of 17. After only one year of dating, the two had to return to their respective homes, which ended their relationship.

However 24 years later, when Karen went to Berlin for filming, she and Johannes met again and their love was re-ignited. Karen didn’t announce their relationship until the 2011 Golden Melody Awards in which she won “Best Singer”. During her thank you speech, she announced her wedding plans with Johannes.

At the time, Johannes had already experienced a divorce and had three children of his own, but Karen didn’t mind being a stepmom because she believes that this marriage was fate. The two are still madly in love and as they celebrate their 30th anniversary of love, they plan to host a party in England. 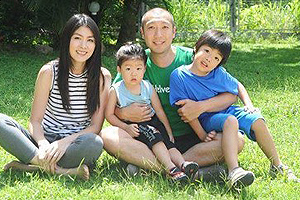 Kelly Chen (陳慧琳)  met her now husband, Alex Lau (劉建浩), in 1992 when they were students in the United States. Though the two did breakup after a year and a half of dating, they returned to each other in the end.  Throughout Kelly’s career, she rarely had any negative news and instead was able to maintain a positive image.

During her concert, she announced that she was marrying his first love after 16 years. In 2008, the two finally tied the knot and Kelly later gave birth to her two sons. To take care of her family, Kelly decreased her workload to spend more time with her sons.