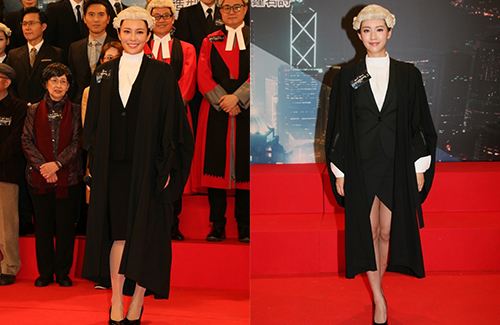 Starring Vincent Wong (王浩信) reprising his role as as the lawyer Hope, who is also blind, the sequel is set shortly after the events of the 2017 legal drama of the same name, which follows Hope as he journeys to seek the truth, using his heightened senses and controversial investigative methods to protect justice. The sequel will also see the return of Owen Cheung (張振朗) and Sisley Choi (蔡思貝), but Ali Lee (李佳芯), whose died in the first series, will not return. Kelly Cheung (張曦雯) will instead take her place as Hope’s love interest.

Kelly described her character as “ambitious and calculative,” but also has intense romantic feelings for Vincent. “He can’t see, so he’s going to have to feel me,” she said with a laugh. “We will get intimate. I know we have some kissing scenes.”

Pointing out that Kelly’s character is quite similar to Ali’s character in the first series, Kelly admitted, “There are some similarities. In this industry there will always be competition and comparisons, but that is what motivates me. I just hope that I’ll be able to do the character justice like Ali.”

Sisley, who will reprise her role as Dino, was drilled with questions about her rumored romance with Hubert Wu (胡鴻鈞). The actress was spotted meeting up with Hubert multiple times in a week, and when confronted by reporters, Hubert declined to answer questions.

“We’re all just friends,” she said. “Two years ago we did a cover of his single ‘I Was Here’ <> and I also participated in his variety show for The Exorcist’s Meter <降魔的>. We’ve actually known each other since filming Young Charioteers <衝線> five years back. (What do you think of him?) He’s a great singer.”

Sisley avoided to answer whether or not Hubert would be a good dating partner, but did say that she’s been too busy with filming and work to do anything else. Sisley said that she would be open to announcing a new relationship through social media, but stressed that her and Hubert are strictly just friends.

A key characteristic of Dino’s character her set of rabbit teeth. “I’ll still have the teeth, but there’s going to be some changes,” revealed Sisley. “I’d like to say she gets a little makeover, but nothing too drastic of a change. In the last series, I was a paralegal. Now I’m a lawyer. I’m looking forward to it. I never got to play a professional before.”

Ali Lee Admits She Has No Dramas to Film