Ali Lee Admits She Has No Dramas to Film 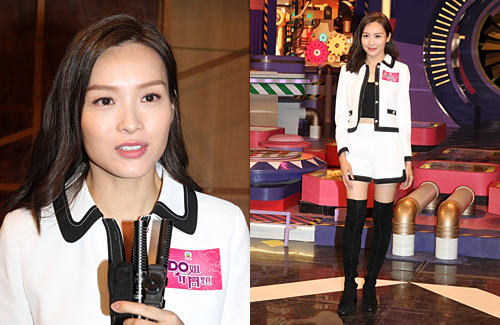 With the ongoing Hong Kong protests, some celebrities who have voiced their pro-democracy views found their careers to be in jeopardy due to the strong backlash from Mainland China. Urging Hong Kongers to vote and exercise their civil rights, Ali Lee‘s (李佳芯) outspokenness has cost her to lose out on leading roles in TVB dramas.

Asked about claims that she is “frozen” by TVB, Ali revealed that she currently does not have any dramas to film.  Ali admitted that her political views were magnified during a sensitive time, and she hopes to shift the focus back to acting instead.

Ali appeared on the variety show Do Did Eat <Do姐有問題> alongside with her Amelia’s Rhapsody <愛美麗狂想曲> co-stars, Moses Chan (陳豪), Edwin Siu (蕭正楠), and Raymond Cho (曹永廉) today. When asked about her working status at the moment, she responded, “I just finished filming a drama last month, and did some promotion work. As well, I went to support Miss Chinese Australia. At the moment, the market is more quiet. Like many artistes who also have this problem, I now have more time on my hands.”

After speaking out her political views, Ali’s career has been plummeting. Although heavily promoted previously, Ali’s drama Death By Zero <殺手>, is now set to be released in 2020. Despite her TV Queen status, Ali will be replaced by Eliza Sam (岑麗香) in the sequel to the popular drama Baby is Coming 2 <BB來了2>. As well, Ali will not be taking part in Legal Mavericks 2 <踩過界2> even though she loves her character in the drama.

In response to all these changes in her work arrangements, Ali was asked if she regretted ever airing her political views. “This incident is very sensitive, which I had I initially underestimated. I was just stating what I was feeling inside, but I didn’t realize the aftermath of it as a public figure. I think it is okay as long as I am more careful. I just want to focus on my acting, and not let politics overshadow my work.”