Despite winning TVB Best Actor last year, Kenneth Ma (馬國明) continues to look forward to new acting experiences. Though he has played numerous doctor roles in big productions, he accepted a down-to-earth character in modestly-budgeted drama Go! Go! Go! Operation C9 < C9特工>. Kenneth shared his passion for acting which he truly enjoys and does not mind diverse, even unflattering roles, “I don’t consider myself as a celebrity–I am an actor.”

While the acting profession is not easy due to its long hours, it is Kenneth’s passion that drives him to give his best performance. “When I first entered the industry, I thought of it as acting for a story and so I enjoyed playing every role. Whether it is acting as a taxi driver, doctor, or vegetable vendor in Go! Go! Go! Operation C9, I equally enjoy the process of acting. Acting is a hard and time consuming job but if you don’t enjoy it, you will suffer doing it every day.”

The secret to his success is not being too assured with his own performances.“As an actor, there will always be setbacks. I often question myself if I could have acted differently in all of my roles. I think any normal actor would do that. I am scared of having too much confidence in my acting, because it will hinder my growth. Of course, it is fine to have some confidence, but you can’t have too much of it,” Kenneth said.

Not Scared to Try New Things

Despite being a heavily promoted actor, Kenneth does not discriminate between grand production or modest projects as he wants to play diverse roles. “I know a lot of artistes like to work on big dramas or they request to work on projects that have potential for commercial success. However, I am an actor and I want to bravely try new things.”

Kenneth’s thirst for new experiences was the reason for accepting his role in Go! Go! Go! Operation C9. “The producer for the drama is Leung Yiu Kin (梁耀堅). I remember bumping into him in the parking lot–he told me that he recently got promoted to a producer, and he asked if I was interested in helping him with his first work. Since he was just promoted, the company would usually arrange green artistes to work with him, and he would not have a big budget. As an actor, I don’t care about the size of the production or how green the costars are. You could help the drama glow, and the drama would also help you.”

Accepting the role, Kenneth was able to enjoy working with new colleagues. It did not matter whether the drama is commercially successful or if it would be an awards winner. “I only enjoy the filming process, and creating the spark with the new actors and the producer. I never feel any pressure when I film. Every drama has their own luck, and big productions don’t always get high ratings.”

Producer is Thankful to Be Working with Kenneth 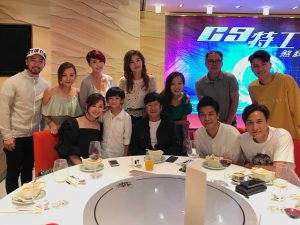 Producer Leung Yiu Kin invited Kenneth to portray Samantha Ko‘s (高海寧) husband in C9 because of the actor’s good image. He said, “I wanted to look for someone who is down-to-earth to play the vegetable vendor in C9. I also thought Kenneth and Samantha would make a good match.”

Since Kenneth is an actor in high demand, the producer was very surprised that Kenneth agreed to work with him, and confessed that he had to double check the actor’s decision. The producer said, “When we were discussing the character and plot, Kenneth listened very seriously and he didn’t say much. I was worried if he really wanted to work on the drama, so I asked him, ‘Are you really going to help me film?’ He agreed again and I was relieved.”

The producer continued his praise for Kenneth, “During filming, he was a professional and did his homework. He always carried a notebook. After he studied the script, he would write down the process and think about how he would act in each scene. Kenneth definitely has the work ethics of a good actor.”

Grateful that Kenneth took the role,