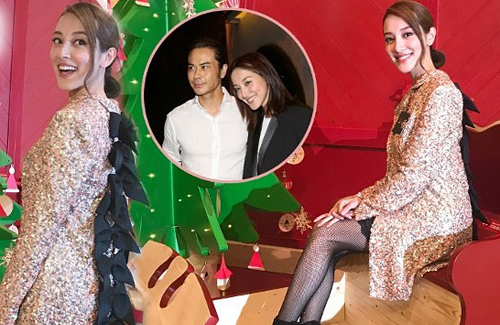 Kevin Cheng (鄭嘉穎) attended a sponsored event to promote an electric shaver along with Louis Koo (古天樂). As a newlywed, Kevin was bombarded with questions regarding his married life with Grace Chan (陳凱琳).

Reporters teased whether Grace would help Kevin shave his facial hair. Kevin joked that people shouldn’t confuse television with real life. “I don’t think anyone’s wives will typically help their husbands shave their mustache. You would usually do these types of things on your own.”

Kevin offered a glimpse into the couple’s married life and revealed that he looks forward to his wife’s cooking most. “Actually, we hired a helper who usually does the cooking. Grace would decide what will be on the menu and manage how to use the money. She’s basically the housekeeper who manages the entire household. She will occasionally cook. I would of course say it tastes good! There is always room for improvement though. She is already doing a good job.”

In regards to Kevin’s comments about her being the household manager, Grace said, “He always says I am a little housewife. He opened a mutual household account and lets me manage how we spend the money. I am quite happy with this responsibility. I only use the money when there is a need for it. I wouldn’t use it to spend and buy things recklessly. Did Kevin also open a spendings account for her? Grace responded, “I am also a working woman, so I use my own money to buy things. I am not familiar with investing, so I usually let him handle any investments.”