41-year-old Hong Kong artiste Lai Lok Yi (黎諾懿) and his wife Nicole Li (李潔瑩) have welcomed their second bundle of joy, and are now a happy family of four!

Born Ahead of Christmas

Sharing the happy news on Instagram on December 11, the actor shared previously that their due date was in December, and said they wished to avoid the Christmas holiday, when hospitalisation and operation fees would be much higher than on regular dates. Having “heard” daddy and mommy’s concerns, their second child, a son has ‘obediently’ arrived ahead of Christmas!

Said to resemble his elder brother Little Spring Chicken, their number two weighed around 7 pounds at birth, and had a head full of thick luscious hair!

Would Not Be Trying for Number Three 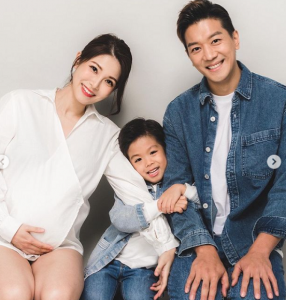 Nicknaming their eldest son Lugus Lai (黎峰睿) “Little Spring Chicken” as he was born between the months of March to June, they did the same for their second child and nicknamed him “Little Winter Ox”. With prior parenting experience, the couple was better prepared for their second child’s delivery and arrived at the hospital for the Caesarean section in the afternoon. While he did not cut the umbilical cord, Lok Yi had accompanied his wife into the operating theater.

Already content with two sons, Lok Yi shared that he and his wife would not be trying for a third child. Preparing Little Spring Chicken for his brother’s arrival, the four-year-old looks all-serious while carrying his sibling carefully in his arms!

While the actor has applied for leave earlier to care for Nicole, their little one’s early arrival meant that he would still be going ahead with his scheduled work commitments these few days.