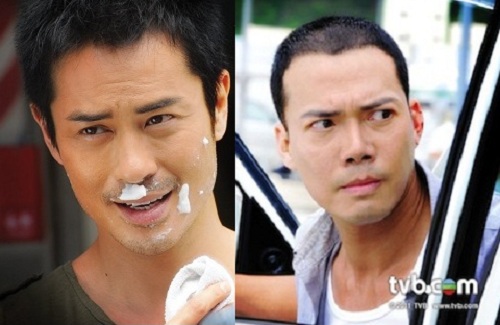 At yesterday’s Filmart 2012 expo, Shaw Brothers announced plans to film seven movies this year. One of the film projects that captured the greatest media interest was Fiery Double Heroes <怒火雙雄>, which will be a crossover movie featuring Kevin Cheng’s (鄭嘉穎) “Law Ba” and Michael Tse’s (謝天華) “Laughing Gor” characters from popular TVB dramas. Few details of the movie were available at this point, except that Shaw Brothers planned to start filming in August 2012.

Last June, the plan to feature Kevin Cheng as “Law Ba” in a film spinoff of TV drama, Ghetto Justice <怒火街頭>, was first announced. However, Shaw Brothers postponed the project as the company focused filming resources on two year-end films, Michael Tse’s Turning Point 2 <潛罪犯> and Bosco Wong’s (黃宗澤) I Love Hong Kong 2012 <我愛HK喜上加囍>. Noting that there was a movie market demand for its popular TVB characters, Shaw Brothers decided to add the ever popular “Laughing Gor” to Fiery Double Heroes, which will likely center around “Law Ba’s” character.

The female lead for Fiery Double Heroes has not been decided yet. Details for the movie project remained scarce, where Shaw Brothers noted that further information will be disclosed at a later date. It was unclear whether Michael Tse’s “Laughing Gor” will appear as an undercover police officer in the crossover film. The timing of the filming of the movie may coincide with Kevin’s return to Hong Kong to record his new EEG music album this summer.

Fiery Double Heroes marked the second time that Kevin and Michael will be working together, after the pair recently completed mainland drama, Hero <英雄>. Despite their recent drama together, Michael professed that he did not see Kevin often on set, due to many of their scenes being filmed separately.

Due to the favorable box office of its recent titles, Shaw Brothers stated that it will continue to produce movies catered to the Hong Kong film market. The company will not focus on the greater mainland China market due to cultural differences among audience’s preferences and other barriers to entry. Turning Point 2 was released in mainland China with a re-edited movie ending three months after its Hong Kong release. The release in China was delayed since the movie was not submitted to the governmental review panel in time.

Jayne: If TVB can make it work, crossover projects featuring their signature characters would be very fun. Crossovers are a dream come true for fans. I wonder if Myolie or Fala will be in this new movie?