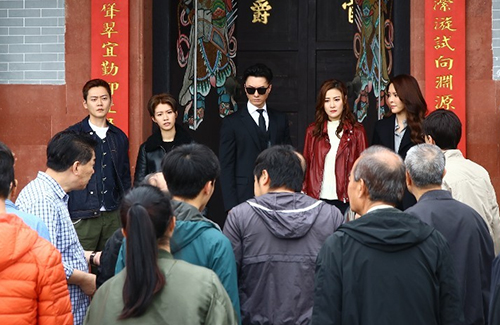 Yesterday, TVB actors Vincent Wong (王浩信), Owen Cheung (張振朗), Sisley Choi (蔡思貝), and Kelly Cheung (張曦雯) were spotted filming for the drama Legal Mavericks 2 <踩過界II> at an ancestral hall in Sheung Shui. The scene was about Vincent blocking the entrance of the hall, but was mobbed by a crowd of angry villagers. Owen comes to his rescue on his motorcycle.

Owen saving Vincent from the a crowd of angry villagers while riding his motorcycle.

Chatting with reporters, Owen joked that he “unlocks” a new power with every new drama he films. “It gets more and more challenging with each show,” explained Owen. “In the first Legal Mavericks I didn’t know how to ride a motorcycle, so I filmed those scenes while riding a rail. Now I finally get to actually ride it. (What more do you want to unlock?) I hope to be able to have Vincent ride with me next,” he joked.

Vincent joked, “I see that they’s getting very still. The traffic accident stats haven’t gone up because of him, so I know he’s actually doing well.”

When the series first began shooting, TVB announced that a portion of the drama will be shot in Myanmar. However, due to COVID-19 outbreak, the production team has decided on sticking to local locations.

“The script had to be slightly altered,” said Vincent. “Fortunately, that subplot really fits Tai O. This decision was obviously made for safety reasons, because even if we do travel to Myanmar to film the series, we would still likely have to be quarantined for two weeks. That would just impede the filming schedule.”