Leila Tong is a Happy and Healthy Mom 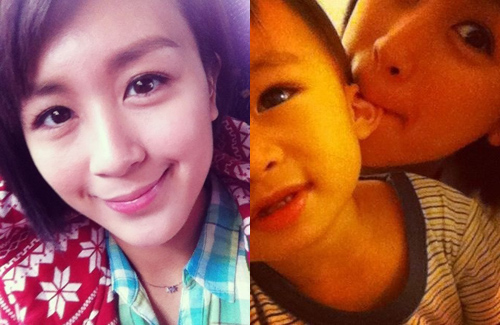 A former child actress, Leila Tong (唐寧) was known for her childlike looks, and often looked younger than her age. Appearing evermore fresh and youthful, it is surprising to see that Leila is actually the mother of a two-year-old boy, Chun Chun! The housewife aura is nowhere to be felt around Leila, and the 31-year-old is continuing to look fresh and young!

Days ago, Leila arrived at an outdoor studio to shoot an episode of i-Cable’s food program, Fabulous Cooking Ladies <食德好‧最佳女煮角>. Although a mother, Leila did poorly while preparing a dish for the hosts to eat; nonetheless, the judges commended Leila’s efforts. She humbly admitted, “[My dishes] do not taste as good as my mother’s. I’ll be satisfied if I can do half as well as her.”

Leila revealed that her husband, theater actor and director Desmond Tang (鄧偉傑), often cooked for the family. She laughed, “He has high demands. I don’t think my cooking will ever meet his standards, so he prefers to cook himself. He is exceptional in cooking western cuisine.”

An advocate for animal welfare and environment conservation, Leila recently became a vegetarian, “I love animals, yet I ate meat. I found the whole thing very hypocritical, so I decided to abstain from eating meat from now on.”

Leila revealed that she will not avoid the kitchen forever and plans to cook a banana desert meal for her son’s second birthday soon. Despite her busy schedule, Leila explained that she will always reserve time for her son. “It is never a good idea to stay separated with your children for too long.” 19 comments to Leila Tong is a Happy and Healthy Mom