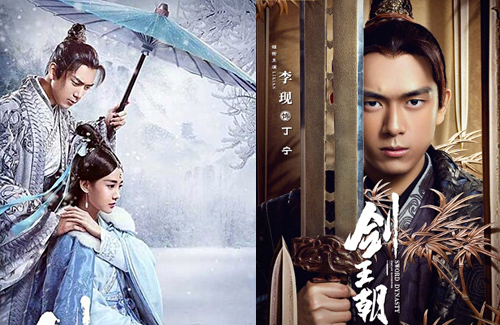 It is officially confirmed that Li Xian’s upcoming new wuxia drama Sword Dynasty <剑王朝> will premiere on December 6. The secured air date had fans in great excitement as they finally get to see the return of their “July boyfriend” back on screen. It has been a while since the actor broke out with his performance in Go Go Squid! <亲爱的, 热爱的>, so many are delighted to see Li Xian in another project again and see how he performs in a historical drama.

Li Xian partners with actress Li Yitong (李一桐), who has participated in many popular dramas, but has yet to experience great popularity herself. Despite this, she is relatively well-versed in playing historical roles and is currently starring in Royal Nirvana <鹤唳华亭> along with Luo Jin (罗晋).

Sword Dynasty is a film adaptation of the novel with the same name. Set in a time where swords were the main choice of weapons, it tells the story of a seemingly ordinary young fighter Ding Ning (played by Li Xian) attempting to assassinate the tyrannical emperor and overthrow his regime. During this period, the jianghu world was plagued with instability and chaos brought about by the raging wars occurring across the lands and borders. Amid this conflicting time, Ding Ning seeks to eliminate power-hungry individuals with his own methods.

Sword Dynasty can be considered Li Xian’s first serious historical drama, as he rarely takes up historical roles. There are high anticipations of his performance.