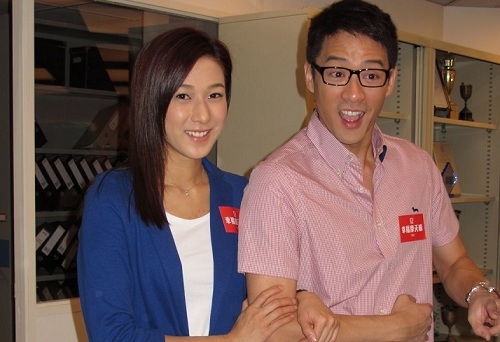 Linda Chung (鍾嘉欣) and Jason Chan (陳智燊) got along well while leading romantic series Missing You <幸福摩天輪>. After Linda’s alleged breakup with martial arts star, Philip Ng (伍允龍), Linda is rumored to have been secretly dating Jason for the last six months. Jason was even spotted giving Linda a ride home.

Linda is from Canada while Jason was born in England. Since both of them were raised in a westernized culture, the pair had a lot in common and can converse freely in English. Jason graduated from the University of London where he holds a master’s degree in economics and knows five different languages, including Latin and French.

Known as one of TVB’s young bachelors, Jason has been rumored to be dating former Miss Chinese International winner, Sarah Song (宋熙年), however both have clarified many times that they are only friends. Due to Jason’s good background and education, he is especially popular among the ladies.  His other alleged girlfriends include Sire Ma (馬賽), Aimee Chan (陳茵媺), Macy Chan (陳美詩), Becky Lee (李璧琦), as well as Lily Ho (何傲兒).

When asked about his latest rumored girlfriend, Linda, Jason said that he thinks Linda is a very attentive person who notices small details. Linda still has recollection of the time they shared a small 2-minute interaction in the past before they filmed Missing You. Jason jokingly said that it was fate and he was touched that she still remembered the exchange after such a long time.

At a promotional event yesterday, Linda was not embarrassed when speaking about her rumors with Jason. Linda explained that it was six months ago when she had received a lift home from Jason, after attending a promotion for Missing You together. Linda explained that Jason was not the only colleague who has dropped her off at home, as she often carpools with other artists. Linda regards Jason as a good friend.

Asked if she had broken up with Phillip Ng, Linda said, “I have been happy all along.” Is their relationship okay? “As to whether it’s okay, I will not respond to this question. Anyway, there’s no need for everyone to worry about me.”

Linda will soon be releasing a pictorial, in which oddities about her will be revealed in the publication. For her August concert in Hong Kong, Linda intends to play the music accompaniment while singing on stage.