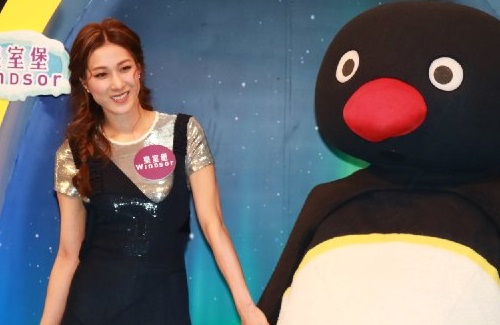 Hong Kong professional car racer William Luk (陸漢洋) admitted in an interview that he is pursuing Christine Kuo (苟芸慧), and considers her a partner he would eventually marry. Christine has also echoed William’s sentiments, but it doesn’t seem like the couple are official just yet.

Christine’s close friend Linda Chung (鍾嘉欣), who recently returned to Hong Kong from Vancouver to attend an event in Causeway Bay, said she is happy for Christine and looks forward to some good news.

“She told me that she’s still trying to get to know him. That’s great!” said Linda with a smile. “I’ve met William Luk before, and he’s very easy-going and smart. If there is an opportunity for them to develop, they’ll have my total support.” (William said he sees Christine as a marriage prospect.) “If a man openly says that, then he’s being very sincere. Hope to hear the good news soon!”

Asking if Christine would pull a flash marriage with William, Linda admitted, “Marriage is about feeling. She is at a suitable age for marriage, and if they are serious about each other, then flash marriage wouldn’t matter. My own marriage was kind of like that. It’s okay!” (Has Christine talked about bridesmaids?) “Nope! She’s a slow burner. I don’t think [marriage] would happen this year anyways.”

Linda, mother of a 7-month-old Kelly, will be returning to Vancouver once she completes her jobs in Hong Kong. The TVB actress shared, “Before my last trip back to Hong Kong, I pumped out about 30 bags of breastmilk for my daughter to drink. But the fridge at home broke down, so the milk spoiled. We had to give her baby formula as a replacement. It wasn’t her first time drinking formula, but she loved it! It tastes different from breastmilk. She really likes to hold the bottle herself! It makes her feel older!”

Linda also said she has been busy searching for a pre-school program for Kelly. “I didn’t expect Canadian parents to be just as intense. There are many things to consider. Very busy!”