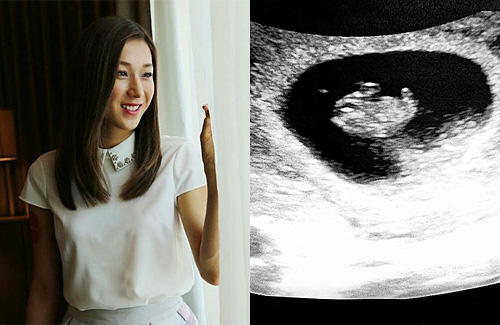 The arrival of Linda Chung‘s (鍾嘉欣) second baby could not be more perfect. With her daughter Kelly now 18 months old, she will be mature enough to share and play with the baby. In her first trimester, Linda reflected on her feelings in being a mother for the second time. Although Linda has left TVB, she reassured fans that she still loves acting and will continue working.

During a New Year’s Eve function on December 31 in Hong Kong, Linda felt nauseous and wondered why her stomach swelled so much. “The next day, on January 1, my friend bought a pregnancy test kit for me. This is a very meaningful baby since I found out on New Year’s Day! I immediately called my husband; he was very happy!” Linda was also very excited to share the news with Kelly that she will be a big sister this summer.

After Kelly started walking, Linda planned to have a second baby. Linda smiled, “After talking about it, and doing it, I conceived in our first attempt!” Linda said both pregnancies were planned and she thanked God for his gifts.
Gaining experience after having Kelly, Linda is a lot more calmer in her second pregnancy. Since her baby bulge is already showing, Linda said there are not many roles she can play right now. However, she asked fans to give her time to focus on her new baby. Although she has moved back to Vancouver, Linda still loves acting and wants to continue working. In May, she will return to Hong Kong to meet with local fans.
Source: On.cc
This article is written by Jayne for JayneStars.com.