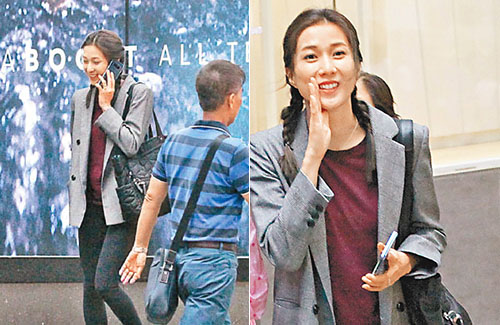 Linda Chung (鍾嘉欣) is back in Hong Kong!

The TVB actress, who has been flying back and forth from Vancouver to Hong Kong in the past few months, was spotted in Central, Hong Kong, at the peak of rush hour, trying to hail a taxi. When she spotted the reporters, she waved awkwardly and smiled back.

Linda continued to roam around while talking in the phone. After hanging up, Linda continued her search for a taxi, but to no avail. At one point, Linda shouted to reporters across the street, “Can you guys help me hail a taxi?”

Soon after shouting the request, a few fans recognized her voice and went up to her for photos, to which Linda happily obliged. After a few more minutes of waiting, a reporter told Linda, “It’s hard to get a taxi at this time of the day.” Linda responded, “I really want to go home to see my daughter!” (Have you tried calling a ride?) “I have, but they don’t have any available. Would it be quicker if I take the MTR?”

After saying that that, Linda quickly bid the reporters farewell and walked to the MTR station.

Linda Chung married Jeremy Leung, a non-celebrity, in 2015 and welcomed their daughter Kelly in August 2016. Linda has since moved back to Vancouver, but would return to Hong Kong every so often for work. Linda will be making a special appearance in the upcoming TVB drama At the Threshold of an Era Again <再創世紀>.

4 comments to Linda Chung Tells Paparazzi to Hail a Taxi