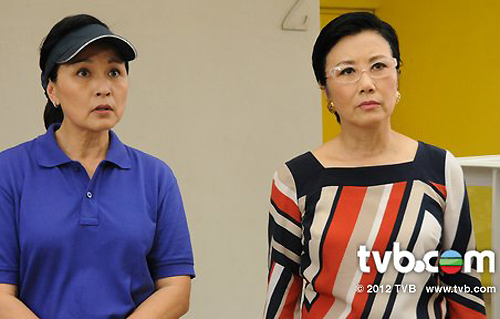 Since its premiere on August 27, TVB comedy, Divas in Distress <巴不得媽媽…>, has averaged 30 rating points, with approximately 1.92 million viewers per episode. Initial marketing campaigns of the drama placed its focus on television divas, Liza Wang (汪明荃) and Gigi Wong (黃淑儀), whose last collaboration was in 1976’s The Legend of the Book and the Sword <書劍恩仇錄>.

Although the two actresses’ comeback started off with a loud bang, they were upstaged by their supporting actors, namely Eliza Sam (岑麗香), Koo Ming Wah (古明華), Him Law (羅仲謙), Mandy Wong (黃智雯), Mimi Chu (朱咪咪), and Chung King Fai (鍾景輝). Eliza Sam has recently achieved the “Goddess” title as after wowing many Hong Kong male viewers with her busty figure and fresh image. Koo Ming Wah’s performance as the feminine “So Gei” received many praises from the audiences, with many claiming that they are already locked on to vote for him as Best Supporting Actor at the TVB Anniversary Awards. Mimi Chu and Chung King Fai were also praised for their comedic acting talents.

On Thursday’s episode, Eliza Sam’s “Hannah” and Chin Kar Lok’s (錢嘉樂) “Erlang Shen” went to the beach to cover a new story for the next day’s paper. Wearing a one-piece swimsuit and shorts, Hannah pretended to have Erlang Shen videotaping her while he recorded their target. Erlang Shen’s camera brushes over Hannah and immediately turns red when he sees her pouring water down her body, drenching her swimsuit.

The scene caught the attention of many netizens, especially male viewers, who praised Eliza to be one of the TVB’s sexiest actresses in recent years. However, many netizens still commented that Eliza’s acting was very stiff and needed a lot of refinement.

Also on Thursday’s episode was the reunion of Mimi Chu’s “Ching Yeuk Tsan” and Chung King Fai’s “Fung Hun Man” after 35 years of being apart. The pair greeted each other in Mandarin dialogue while standing in front of a CGI background that changed to the seasons. Their encounter ended with the theme song of 1983’s The Return of the Condor Heroes <神鵰俠侶>, performed by Teresa Cheung (張德蘭).

Koo Ming Wah’s comedic talent is also acknowledged in Divas in Distress. His performance as the feminine and friendly So Gei has attracted over 50,000 netizens to support him to win this year’s Best Supporting Actor and Most Improved Male Artist awards.

Him Law and Mandy Wong are Sweet

Divas in Distress is Him Law and Mandy Wong’s fifth collaboration. The onscreen couple’s sweet chemistry had previously overshadowed Joe Ma (馬德鐘), Flora Chan (陳慧珊), and Sharon Chan’s (陳敏之) love triangle storyline in 2010’s Suspects in Love <搜下留情>. Him and Mandy’s ambiguous relationship in Tiger Cubs <飛虎> had also created much heated discussion within public forums, and their storyline in Divas in Distress further contributed to the couple’s popularity. Netizens regarded Him Law’s “Vincent” and Mandy Wong’s “Yihei” to be tragic characters, and after going through many ups and downs – from the intervention of Vincent’s mother to Yihei’s controversial past – the couple finally got together in Thursday’s episode. Many netizens regarded their romance to be sweet and emotionally satisfying.

The two-hour finale of Divas in Distress will air on Sunday, September 23. With one week left in the broadcast, the drama may have a chance to reach to the list of 2012’s top 10 highest-rated Hong Kong television dramas by the end of the year.