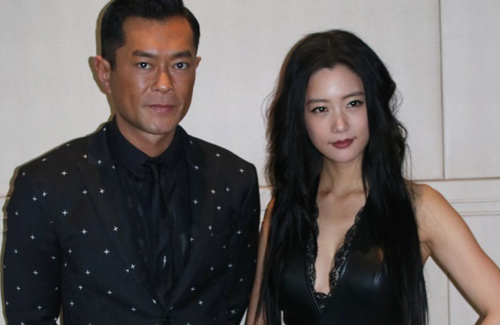 Louis Koo (古天樂), Charmaine Sheh (佘詩曼), and Korean actress Clara Lee have been busy filming for the movie version of TVB’s 2014 crime thriller, Line Walker <使徒行者>. Louis revealed that he will have many action scenes opposite Clara.

Although many of the action shots were done by a stunt double, Louis and Clara still had to personally engage in many fight scenes. During filming yesterday, Clara, who possesses both a beautiful face and a sexy figure, appeared in an outfit with a plunging neckline and four-inch heels. Due to her difficult outfit, the film’s action choreographer, Chin Ka Lok (錢嘉樂), personally demonstrated the moves to Clara. The scene depicted Clara ambushing Louis’s neck from behind with a steel bar. Louis joked, “Of course we didn’t use an actual steel rod, but the weapon still broke. My neck is so solid.”

Scheduled to fly to Brazil for filming, Louis expressed his concerns regarding the health warnings currently in Brazil. It was recently reported that the surge in cases of the Zika virus, which was caused by the influx of the Aedes aegypti mosquito, has caused a global health scare.

Louis expressed, “I am worried and will definitely be bringing mosquito repellant. But is it effective? Sometimes, I see people repeatedly spraying it on, Why not just drink the entire bottle?”

Charmaine, who will not have to fly to Brazil for filming, expressed happily that she will be able to spend the Lunar New Year with her family.