Actor and director Louis Koo (古天樂) invested years and millions into his ambitious sci-fi action flick Warriors of Future <明日戰記>, which opened to a combined $10 million HKD in box office takings across Hong Kong and Macau over two days. Going on variety program The Popcorn Show <爆谷一周>, the 51-year-old shared about his passion and future ambitions with its host Vincent Kok (谷德昭). 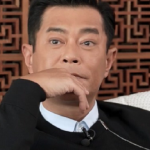 Known to be a sci-fi fanatic, Louis revealed that his love affair with the genre began in childhood. “I became a fan of sci-fi films when I was nine, who could be earlier than me in making sci-fi films? The film that had the greatest influence on me has to be Star Wars, the films were so realistic even though technology was nowhere as advanced back then. Looking back at the graphics now, lightsaber duels were actually really slow, but the concept was brilliant and had me hooked. It also inspired me to think, why don’t we make sci-fi films of the sort?”

Host Vincent Kok shared that he once peeked into Louis’ toy collection, and already knew that the latter was a sci-fi movie geek. In fact, Louis was even labeled a CG expert by production crew members! On the next move in his sci-fi masterplan, Louis shares how he attempts to create a photorealistic set using cutting-edge technology for his next sci-fi epic themed around a battle in space.

Citing The Batman, he described, “Originally we wanted our next sci-fi film to be ten times more complex than “Warriors of Future”, but I feel that we have more to learn to produce (the film). I intend to use LED screens to shoot real-time and 360-degree LED walls to render space on set, and then shoot using IMAX cameras…because to me sci-fi films are about invention, and infrastructure,”