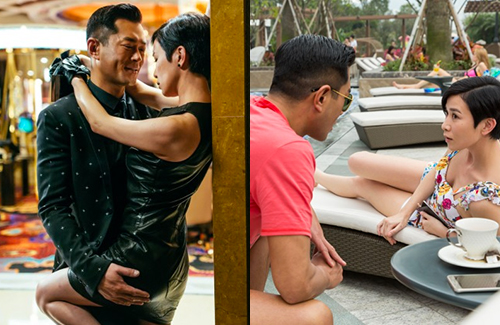 The following article contains spoilers for Line Walker: The Movie, in cinemas on August 11, 2016.

Line Walker: The Movie <使徒行者> is Louis Koo (古天樂) and Charmaine Sheh’s (佘詩曼) second film collaboration, after 2015’s Triumph in the Skies <衝上雲霄>. In Line Walker, a film adaptation of the original 2014 TVB drama, Charmaine reprises her role as the undercover Ding Jeh, who is now back in the field to hunt for another missing UC. Louis stars in the new role Young Master, Ding Jeh’s target.

Though Louis and Charmaine do not play a couple in the movie, the pair share a few humorous scenes together where they engage in tricky mind games. Aware that Charmaine is trying to investigate him, Louis would prank her and purposefully give her a hard time.

One particular humorous scene sees Louis and Charmaine attempting to “flirt” with each other, and then Louis gives Charmaine a few pats on her butt. Francis Ng (吳鎮宇), who plays Charmaine’s superior and potential love interest, looks on angrily. In regards to Louis patting her butt, Charmaine laughed and said she didn’t feel embarrassed at all. “Louis is a great guy. My ‘pat pat’ has always been here. It won’t leave!”

When speaking about his most memorable scene with Charmaine, Louis recalled, “All of my scenes with Charmaine happened in Macau, so we did not get to collaborate much this time. Also, most of our scenes together were about me trying to prank her. There was one time where I told her to wear a swimsuit, but I was actually giving her the wrong instructions. Our second scene together happened in a casino. I knew she was following me so I tried to prank her again. We also had another scene together where we fought [Korean actress] Clara Lee, who plays an assassin. Though Charmaine’s appearance can get quite burdensome, she and Francis Ng do save my live.”

In regards to Charmaine’s swimsuit scene, Francis said Charmaine only wore a one piece and was too covered up. Charmaine explained with a laugh, “It’s true that it was a modest piece, but before shooting that scene, I also shot many action-packed scenes and sustained a lot of bruises. I wanted to cover them up. I didn’t want people to think that I was beaten! Fortunately, my bruises were all healed when we shot this scene!”

Line Walker: The Movie, directed by Jazz Boon (文偉鴻), also stars Nick Cheung (張家輝). The movie will be in theaters on August 11, 2016.