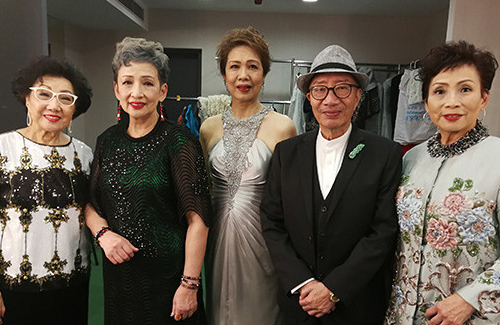 The 75-year-old Alice has been in the film and television industry since the fifties. Prior to her entry into the television industry in the mid-1980’s, Alice was a professional singer with many local supporters. Despite her close relationship with her brother-in-law Yue Chi-ming, the pair rarely performed together in music. She is grateful for the opportunity of being able to step on the same stage as her sister and brother-in-law, and shared that the concert was not only an event for fans and old friends, but also family. 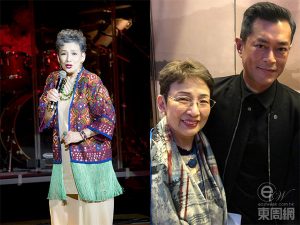 “Many family members came to support us,” she said happily. “My son and daughter-in-law helped me get my stage outfits, and also assisted me in make-up. My younger siblings and their children are all backstage. It’s a great family event. I’m very happy.”

As for performing alongside her brother-in-law Yue Chi-ming, she joked that they had been mistaken as a real couple multiple times before due to their frequent collaborations at TVB.

Yue Chi-ming entered the industry in 1968 through a singing competition, and later joined the television industry due to his interest in acting. “I’m over 70 years old, and I still get to stand on stage to sing. I am very happy,” he said.

But friends and family weren’t the only supporters. Hoffman Cheng (鄭世豪) and Bond Chan (陳少邦) showed their support, even stepping on stage to congratulate Alice. Louis Koo (古天樂) also showed support by purchasing hundreds of tickets, and giving them away to senior citizens as a gift. Louis, who grew close with Alice after collaborating in 1995’s Return of the Condor Heroes <神雕俠侶>, said Alice is a senior that he respect very much.