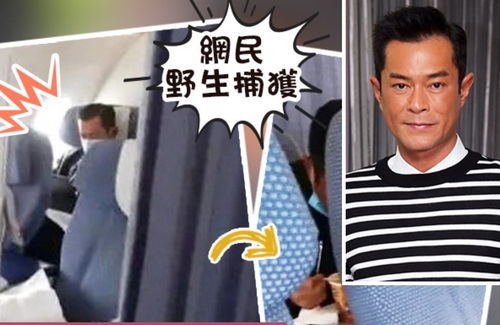 Although Louis Koo (古天樂) has become a movie tycoon in recent years and earns an estimated HKD 400 million a year, netizens discovered Louis is still very down-to-earth. Not only is the kindhearted actor philanthropic, but he is also very frugal. A few days ago, some mainland netizens photographed Louis flying in the economy class and eating a cup noodle on the plane.

When Louis was flying to Shanghai to promote a body wash brand, he was discovered by a netizen on the plane. After the plane took off, the netizen discovered a male passenger was eating a cup noodle behind him, and when he took a closer look, he realized the passenger was Louis!

Since then, the netizen’s photos of Louis have been circulated online. Netizens praised Louis for his simple and low-key lifestyle despite being a big star. Sure, he has an amazing film career as the founder of One Cool Film Production Limited and the chairman of the Hong Kong Performing Artistes Guild, but he also invests a lot of money in film production to support new directors and the industry.

Moreover, Louis has been actively doing charity work for many years. He began building primary schools in China since 2009, and he established a total of 111 Hope Primary Schools in 2010. In addition to donating money, he arranged special personnel to oversee the construction to ensure the safety and perfection of the structures.

However, whenever reporters asked Louis about his good deeds, he always simply responded, “It is the thought that counts, I don’t want to talk about money, and I don’t have a goal of how many schools I want to build.”

Louis, who has immense kindness toward strangers, is also a filial son. It is rumored that he personally donated HKD 200 million to pray for his parents, and he splurged on an HKD 50 million yacht earlier this year to let his mother watch fireworks on it. It can be said that Louis spends all the money earned from his work on charity and his family, but he lives a frugal life himself.

Louis Koo Has a Blood Clot in His Brain