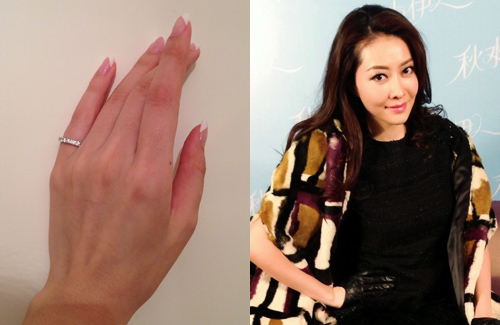 Just when fans finally thought that Lynn Hung ‘s (熊黛林) status as Aaron Kwok’s (郭富城) future wife was secured, she hinted that the couple had broken up.

Yesterday, Lynn posted a photo on Weibo of a ring on her left hand pinky finger, in which such an adornment usually indicates a breakup. Lynn also wrote, “A present to give myself blessings for a new beginning.…” The photo and message were widely interpreted as Lynn’s announcement that she broke off her 7-year relationship with Aaron.

Vigilant fans may have noticed numerous quizzical Weibo messages that Lynn has been posting online in the last few weeks. On April 4, she posted a photograph of her two dogs with the message, “With the both of you, I can go through anything.”  Two days later, she followed up with, “Assumption. It’s always assumption. Assuming you can, assuming you are strong. Assuming you won’t mind. But those have been branded in your heart for a long time. Perhaps you just realized it too late.”

Last month, Aaron has also renamed his race horse from “Love River” to “Love Warrior”. It was previously claimed that Aaron had named the horse “Love River” to demonstrate his love for Lynn. The name change may be an indication of a rocky relationship gone awry.

Aaron and Lynn met while filming the music video for “Kid of Wind” <风之子> in 2006. Their love relationship started from their kiss in the video. Despite their 15-year age difference and the negativity from the public, they maintained a strong bond. Even when Aaron was rumored to have a brief fling with Mango Wong (王秀琳) in 2009, he announced publicly, “Miss Wong is not my rumored girlfriend!” thus quelling the rumor that he had broken up with Lynn.

On March 18, the Hong Kong media reported that Aaron had fallen for Christine Kuo (苟芸慧) while filming a PCCW mobile ad together. It was alleged that Christine and Aaron have been secretly dating for more than 5 months since they took to each other on the set of the commercial. Aaron’s Porche GT3 sports car was also reported to be spotted outside of Christine’s building on several nights.

After the report came out, Lynn, together with her mother, attended Aaron’s concert. Though they were not seated in VIP seats, Aaron acknowledged Lynn’s presence by waving to her and professed his love for throughout the night by saying “You are my only one” and “I love you!”  When Lynn was queried about the rumors regarding Christine the next day, she brushed it off confidently.

That same night, Christine showed up for Aaron’s concert but brushed off the rumors, “It’s a rotten peach blossom! There’s nothing between us. I apologize if they have been dragged into the false reports.” Lynn was clearly unhappy about Christine calling Aaron a “rotten peach blossom” and made snide remarks to Christine “to not provoke the rotten peach blossom”. Shortly after, Christine apologized for her comment and Aaron also dyed his hair from blue to black and joked, “Blue (which has the same sound as rotten in Mandarin) peach blossom should be washed off after the show!”

Although Aaron and Lynn appeared united last month in fending off rumors that their relationship went bust, Lynn’s latest Weibo messages indicated that the couple’s relationship did not survive the 7-year itch.