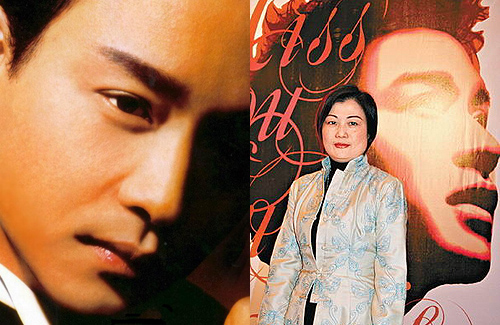 To commemorate the 10th year of Leslie Cheung’s (張國榮) passing, the superstar’s manager of 22 years, Florence Chan (陳淑芬), organized a series of events and exhibitions in honor of Leslie’s achievements and milestones last week. Two large, sold-out tribute concerts were also held on the eve and day of his 10th anniversary death at the Hong Kong Coliseum, which were attended by over 20 top stars in the industry. The commemorative concert also received a live broadcast through Hong Kong’s TVB Jade, and was aired live through streaming websites in mainland China, Taiwan, and Japan.

The Leslie Cheung memorabilia has made huge profits, which were announced to go to charity, but recent Hong Kong tabloids claimed that a majority of the earnings actually went to his manager, Florence. As reported by East Week, all $20 million HKD of the earnings went to Florence, which were accumulated from concert ticket sales, DVD sales, broadcast rights, and merchandise sold at the exhibition.

The singers who performed at the tribute concert were also exploited, according to the tabloid reports. Each singer only received a meager $10,000 HKD for commuting compensations and a paper crane as a souvenir. It was also reported that each performer had to pay for their own hair and make-up.

At the “Miss You Much Leslie” memorial gathering on April 1, in which the audience was given exclusive never-before-seen footage of Leslie, each guest had to pay up to $200 HKD for entrance. Leslie’s partner Daffy Tong (唐鶴德), who made a surprise appearance at the end of event, reportedly did not receive any royalties and was only give a memorial T-shirt as a reward.

Florence’s recent appearance at a Macau casino further fueled the exploitation rumors, in which she was seen gambling $10,000 HKD at a time.

Also the manager of Jacky Cheung (張學友), who recently set a world record of performing for the largest combined audience for a live act in 12 months, Florence’s net worth reportedly exceeded $300 million HKD as of 2013.

Florence has since denied the exploitation allegations, saying, “Please do not measure our respects to Leslie with money.”

She added firmly, “I feel that I don’t have to clarify anything. We all used our hearts and love to give Leslie his 10th anniversary present. Please do not use money as a way to measure each singer and crew member’s respect for Leslie.”

Florence further stressed that she did not profit from these events and assured that all of the proceeds will be donated to the End Child Sexual Abuse Foundation.