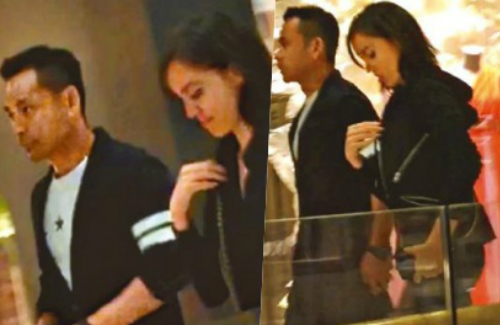 Macau casino tycoon Alvin Chau (周焯華) became the father to two daughters last month, when both his wife Heidi Chan (陳慧玲) and lover Mandy Lieu (劉碧麗) gave birth to baby girls. Mandy, who was in London at the time, purportedly leaked the birth of her daughter to the press. This infuriated Alvin, who allegedly started a cold war with his lover. However, the storm seemed to have passed and the two were spotted shopping together in Singapore.

A reader known as Ms. Wong revealed to the press that she saw Alvin and Mandy earlier at around 7:00p.m. in the city’s luxurious shopping centre, ION Orchard. Ms. Wong explained that she did not notice them at first, until she heard Alvin speak in fluent Cantonese. She recognized who they are after turning in their direction. The lovers were both dressed in black and matched each other.

Ms. Wong spilled, “They didn’t behave intimately, nor did they have anyone else with them. But Mandy seemed to depend on Alvin the entire time.” Ms. Wong added that Mandy appeared to have gotten back in shape quickly after giving birth. She wore a black hooded jacket, black shorts, and high heels.