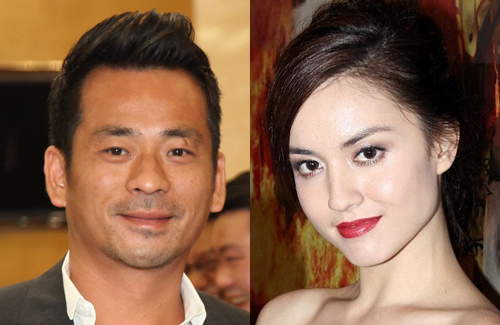 After much speculation by the media, Hong Kong model and actress Mandy Lieu (劉碧麗) finally confirmed that she is dating Macau casino tycoon, Alvin Chau (周焯華).  Mandy expressed her open admiration for Alvin, but also caution over his marital status.

Alvin is married to Chan Wai Ling (陳慧玲), an executive at charity organization, Yan Oi Tong. Despite his marital status, Alvin has been linked with models Kibby Lau (劉俐) and DaDa Chan(陳靜) in the past. It was rumored that Alvin had helped DaDa pay her early contract termination fee with her management last year.

Mandy debuted as a commercial model in 2003. Though the 29-year-old’s climb to stardom was steady. Known mostly for her appearances in many of TVB’s variety shows, Mandy rarely starred in movies in the past. However, Mandy suddenly “struck it rich” and invested a seven-figure sum to start her own modeling agency, Quest, last year. She also scored three significant roles in three major films, one which was a leading role.

Reports say that Mandy’s sudden spike in her career was because of Alvin Chau, the biggest casino tycoon in Macau. He owns Suncity Group, an organization that manages over 200 junket operators in Macau. Aside from his gambling businesses, his influence has also reached to the entertainment industry. He established the music and film publisher Sun Entertainment Culture Limited, which has Paco Wong (黃柏高) as the company’s managing director. Sun Entertainment Culture manages Andy Hui (許志安), Fiona Sit (薛凱琪), Janice Man (文詠珊), and director Pang Ho Cheung (彭浩翔). According to various sources, Alvin’s assets exceed $5 billion HKD.

To Kit (陶傑), the director of Mandy’s latest film Enthralled <愛．尋．迷>, admitted that Alvin was one of the investors for his film. On Mandy’s relationship with Alvin, the director said, “Alvin did help out in the film. However, I don’t see Mandy getting special treatment.” To Kit later read the reports about Mandy and Alvin. He laughed and said, “Wow, I couldn’t even guess. Of course I am happy [for them]. It is good to see my actors getting taken care of. I hope they all get the same happy ending.”

Mandy and Alvin’s relationship came under speculation a few months ago, when she was spotted with Alvin at a birthday party in Macau. Last week, the pair went to a dinner gathering together. They were photographed hugging and whispering to each other when they left the restaurant. Mandy also spent the night at Alvin’s home in Kowloon. She appeared embarrassed when she spotted the paparazzi.

“As for Mr. Chau, he is a very charismatic person and I admire him immensely,” wrote Mandy in her statement. “Very smart, wise and a man of vision, he continues to inspire me in many ways. We met earlier this year and have just started to get to know each other lately. What will happen in the future no one knows. I certainly don’t. For anyone who knows me, my friends and my family, the most important thing to me in a person is their character, not what their background is. And I very well do not care about a person’s social or financial status.”

However, Mandy continued more cautiously, “Unfortunately as I read the news reports, it came to light that his relationship status is not what I thought it to be,” continued Mandy in her statement. “I would need some space and time to process this.”