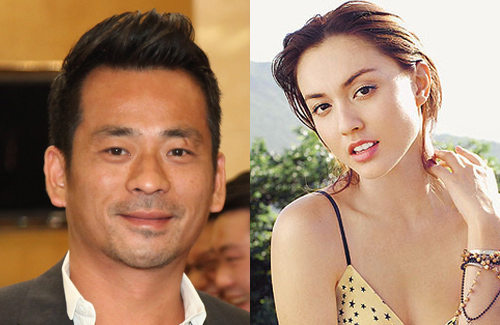 Could Mandy Lieu (劉碧麗) be pregnant with her lover’s baby? The model is reportedly four months pregnant, and was spotted visiting a hospital for a check-up. The media speculated that the father of the baby may be Alvin Chau (周焯華), a gambling and movie mogul who is married to Heidi Chan (陳慧玲). Interestingly, Heidi is also confirmed to be over four months pregnant.

In August, Mandy confirmed that she was in a relationship with Alvin Chau, but expressed that she was unaware of Alvin’s marital status at the time they became involved. After his affair with Mandy was exposed, Alvin apologized to Heidi by taking her on luxury vacations to Europe. Although it was speculated that Alvin ended his relationship with Mandy, the couple continued to date in secret. In November, Alvin was spotted gambling in a Macau casino while sitting on Mandy’s lap the entire night.

After the news of Mandy’s pregnancy broke, reporters phoned Mandy’s manager Marie, who did not explicitly deny the reports. Asked if Mandy was carrying Alvin’s child, Marie said, “You will know when the time comes!” Marie also expressed that Mandy is currently resting overseas and is very worried about her future.

On December 22, Alvin was spotted taking Heidi to the hospital for a routine check-up. After Heidi’s appointment, Alvin was the first to leave the hospital, followed by his wife and daughter soon after. Reporters rushed to Alvin and Heidi to congratulate them, but Alvin cursed at them, “Move the [expletive] away!”