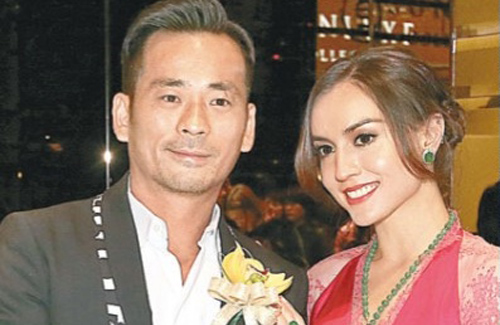 Although many believed that the whirlwind drama between casino tycoon Alvin Chau (週焯華), Heidi Chan (陳慧玲), and Mandy Lieu (劉碧麗) will finally subside after Heidi announced her intentions to file for divorce, the trio continue to make headlines. Mandy gave birth to Alvin’s daughter last May in London, and is now reportedly four months pregnant with a boy.

Mandy is expecting to be due in July, much to Alvin’s delight. Although Mandy’s belly was evidently not protruding during a recent vacation to Phuket, a closer look at her pregnant photos last year revealed Mandy’s tendency to retain a slim figure during her pregnancy.

Although Heidi had great tolerance for Alvin’s extra-marital affairs in the past, she surprisingly announced her divorce intentions in December. Could Mandy’s second pregnancy be the reason for Heidi’s decision to file for divorce?

Despite the recent turn of events, Heidi is still living with Alvin’s father in the same house. However, reports emerged that Mandy will return to Hong Kong in March to set her up new love nest with Alvin.

When reached for comments, Mandy’s manager dodged the question and refused to respond to Mandy’s personal matters.

14 comments to Mandy Lieu is Pregnant with Baby Boy?