The #MeToo movement has inspired men and women from all over the world to speak against sexual harassment and misconduct, kickstarting a new generation. Many of Hong Kong’s very own actresses have chosen to speak up about their past experiences, including Louisa Mak (麥明詩) and Sharon Chan (陳敏之).

According to a book written by a former TVB employee titled The Eroding History of a TV Station #MeToo <電視台糜爛史#MeToo>, which was published last month, the author shared that she was a victim of #MeToo while working with TVB’s social media platform See See TVB, having suffered verbal sexual harassment on set before.

The author, Katvia Yuen (袁苡晴), then dedicated an entire chapter in her book to detail the event of a TVB actress who went through a similar experience. Katvia said the victim was a former Miss Hong Kong winner who suffered verbal sexual harassment while filming a mini web series produced by See See TVB. The victim, which Katvia called the “short-haired girl,” had a quiet and introverted personality. Perhaps finding the victim too passive, the web series’ producer started to spread rumors and sexually harass the victim verbally, saying, “The short-haired girl’s [expletive] got ripped open!”

The victim’s name was never revealed, but enough details of the victim were left behind for readers to make a guess. Katvia mentioned that the victim sustained a lumbar injury after performing a wire work stunt. The victim also had to turn down a grand production drama in order to recover from her injuries. 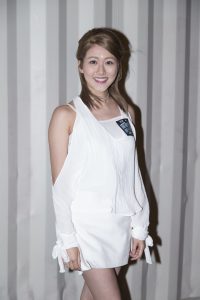 As of the book’s publication, See See TVB was only involved with one web series, The Taxorcist Sidequel — Chapter One <降魔的番外篇—首部曲>, a spin-off of the TVB drama The Exorcist’s Meter <降魔的>. The miniseries, which comprised of 12 8-minute episodes, starred Yeung Chiu-hoi (楊潮凱), Derek Wong (黃建東), Gloria Tang (鄧佩儀), and Kelly Cheung (張曦雯). Both Gloria and Kelly are beauty pageant winners, but only Gloria had short hair at the time. Coincidentally, Gloria did sustain a lumbar injury while filming a wire scene for The Taxorcist Sidequel. She had to turn down My Ages Apart <誇時代> as a result.

Gloria was reached out for comment, but the 26-year-old actress denied being the victim. Busy with multiple filming projects, Gloria said she doesn’t even have the time to eat, let alone read about gossip items from her coworkers.

“I don’t think that person is me,” said Gloria. “That’s never happened to me at work.”