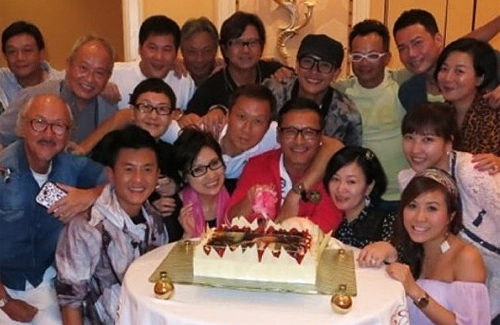 A witness said, “They stayed in a separate room. The waiters brought in alcohol every hour.”

The dinner party ended four hours later. Michael, Jaime, and a middle-aged female friend went to pick up their white minivan in the parking lot. Michael hugged the woman and gave her a goodbye kiss on the cheek. Jaime reportedly looked “stunned” when Michael kissed the female friend. Michael allegedly had a history of being overly affectionate with women, and he even developed rumors with Eric Tsang’s (曾志偉) daughter-in-law, Renee.

Michael, however, dismissed the rumors and explained that kissing a woman’s cheek was merely “simple social etiquette.”

“Jaime knows what Michael has, so she is worried,” a source allegedly close to the couple leaked. “She knows that there would be many women flocking to Michael’s side. That’s why she received that slimming endorsement in 2009, and went from 160 pounds to 110 pounds.”