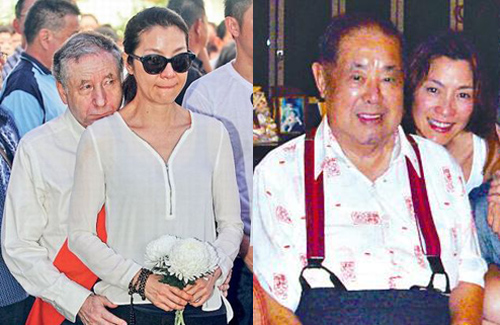 Michelle Yeoh‘s (楊紫瓊) father passed away on November 5 in Malaysia at the age of 89. Michelle immediately withdrew herself from filming engagements on the set of Strike Back in Hungary. Accompanied by her long-term boyfriend, Jean Todt (尚陶德), Michelle flew back to Malaysia to mourn her father’s death.

Michelle greatly admired her father and saw him as her hero. She revealed that although he was a lawyer, he gave allowed his children freedom in choosing their own paths in their lives.

Although Michelle and Jean are only engaged and have yet to be legally married, the obituary listed Jean as Dato’ Yeoh’s son-in-law. While it has been more than a year since Michelle and Jean’s engagement in 2013, she said that her father never tried to interfere with her wedding plans. She was also in no hurry to get married, as she and Jean already saw each other as life partners.

As Michelle is of Hokkien ancestry, her traditions dictate that if one wishes to get married after a death in the family, one had to either wed within a hundred days or after three years. When told of this by the reporters, Michelle expressed surprise and admitted that she was not aware of this tradition. She added that she would not be abiding by the rule and would freely decide on when the wedding would be.