Mike He on Kissing Ady An: “It’s Like Licking Pig Poo!” 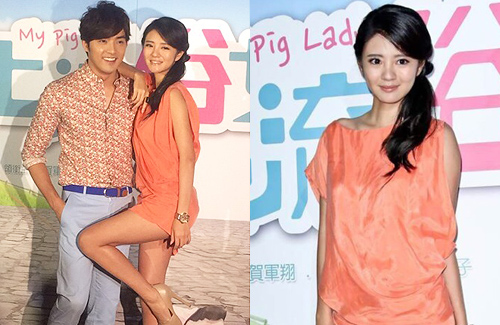 With the new idol drama, My Pig Lady <上流俗女>, finally scheduled to broadcast in Taiwan this week, Mike He (賀軍翔) and Ady An (安以軒) attended the press conference for the premiere.

In the romantic comedy, which was released as Go, Single Lady <真愛遇到他> in mainland China, Ady plays the daughter of an ambitious and wealthy pig farmer who hopes to get rid of her nouveau riche image and mingle with members of the upper class. While pursuing her dreams, she encounters Mike – a former member of the wealthy second generation who has now become broke. Together, they plan to help each other achieve their goal of becoming part of the upper class, and along the way, they slowly become attracted to one another.

In the series, Ady and Mike have numerous intimate kisses and bed scenes. Nervous about kissing Mike in front of the camera, Ady not only rehearsed with the actor beforehand, but she also drank beer before filming. While Ady praised Mike and named him the new ‘”God of Kissing” after their collaboration, Mike jokingly commented on his kissing experience, “It felt like licking pig poo!”

Ady: “Give Jaycee Chan a Chance”

Having previously worked with Jaycee Chan (房祖名) in Chrysanthemum to the Beast <給野獸獻花>, Ady hoped the public would give Jaycee and Kai Ko a second chance after their arrest for marijuana use. “I’m very surprised and I feel sorry about it. Everyone makes mistakes in life. We fight and we’re scared while walking down the road, so I hope that everyone will give them a chance so they can get back up quickly.”

24 comments to Mike He on Kissing Ady An: “It’s Like Licking Pig Poo!”