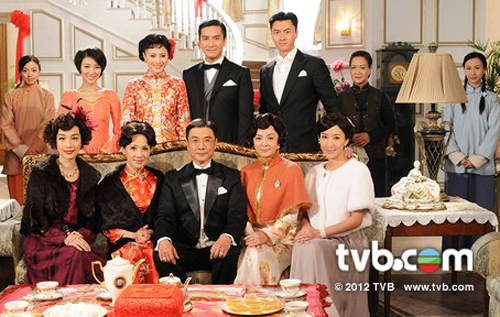 It has already been one week since the period epic, Silver Spoon, Sterling Shackles <名媛望族>, has hit the Hong Kong television screens. With only six episodes out, the drama has already attracted many loyal followers due to the its emphasis on controversial characters and intimate love-making scenes. But this is just the beginning.

Next week’s episodes will be piled with sex scenes between Damian and Tavia, introducing a new possible love triangle, and more jealousy among Damian’s wives!

Episode 8 – Yvonne (Elena Kong) and Arthur attend a charity auction together. At the auction, Yvonne falls in love with a diamond necklace, and she convinces Arthur to buy the necklace for her. Arthur successfully bids for the diamond, but in the end, Arthur gives the necklace to Tsz Kwan (Tavia Yeung).

Episode 9 – Sam Lan (Mary Hon) discovers Arthur’s affair with Tsz Kwan by recognizing her scent coming from Arthur’s coat. When Arthur tells her that he intends to marry Tsz Kwan as his fourth wife, Sam Lan immediately says no. Sam Lan will later die from a stroke.

On the other hand, Tsz Kwan is aware that Arthur’s true love is Yee Yin, and she drinks her sorrows away. Her best friend, colleague, and cross-dressing performer Suen Fei Fei (Jess Sum 沈卓盈) tells her, “There is still one other who loves you.” Tsz Kwan falls asleep on Fei Fei’s shoulder, and it is implied that Fei Fei may see Tsz Kwan more than just a friend.

Episode 11 – When Yvonne discovers that Arthur plans to marry Tsz Kwan, she cries, “My family owns a banking business! Having to marry you as your third wife is already demeaning me, yet you still want to marry that actress as your fourth wife?”

Yvonee meets Tsz Kwan at a clothing store, who is trying on new clothes to attend a party with Arthur. Yvonne tells the store associate that she wants to purchase the dress that Tsz Kwan is wearing. Tsz Kwan willingly strips herself to her undergarments and gives the dress to Yvonne.