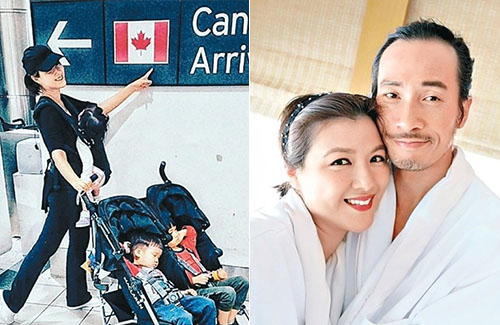 Moses Chan (陳豪) has long been taken by Aimee Chan (陳茵媺), but when it comes to being the industry’s “best deal”, no one has even come close to his level.

Married since 2013, Moses and Aimee already have three children: first son Aiden, second son Nathan, and daughter Camilla, all one year apart. When Moses told the press that he was good at math, he wasn’t joking.

Prior to his major acting debut in 1994, Moses was a fresh college graduate from Australia, with an accounting degree. It took him nearly ten years to hit his first break with 2002’s Where the Legend Begins <洛神>, and another few years until he won Best Actor for 2007’s Heart of Greed <溏心風暴>. Now, Moses is one of TVB’s highest-paid actor, with a base pay of at least HK$50,000 per episode.

With Aimee taking a long hiatus for her kids, Moses became the sole breadwinner of their family. His money goes to his wife, his three kids, their three domestic helpers, and one driver. Insiders think Moses has to spend at least HK$200,000 a month for his big family.

Though he makes good money with TVB, most of Moses’ income actually comes from his endless amount of commercials. Whether it’s gas, social media, credit cards, moon cakes, Chinese medicine, or even hair transplants, Moses is the number one celebrity to go to when it comes to endorsements. The actor has a base pay of at least HK$100,000 for event appearances, and if that event included Aimee, expect organizers to pay at least HK$200,000.

With his accounting background, it didn’t come to a surprise to know that Moses likes to plan long-term goals. He’s always watching the stock market, and always seeking out the best opportunity to purchase a property or start a new business. His coffee shop businesses have been going so well, it wouldn’t be far-fetched to say that it may end up publicly listed in the future.

But in the end, putting all money aside, Moses is still a romantic family man at heart. He has said a number of times that his dreams are Aimee’s dreams, and whenever Aimee is busy with a schedule, Moses always makes time to stay at home to watch the kids. If possible, Moses would always try to take a day off to celebrate his wedding anniversaries with a Aimee.

Aimee has married a man who is financially stable and treats her like a goddess. It’s going to be hard to beat.