From shooting to stardom with her role as Little Dragon Girl in The Return of the Condor Heroes <神雕侠侣> to starring as the titular character in Mulan <花木蘭>, Liu Yifei‘s (also known as Crystal Liu 劉亦菲) popularity and international status are expected to rise dramatically after Mulan premieres in the U.S. on March 27. However, it’s hard to imagine the film will thrive under the ongoing coronavirus, the PG-13 rating, and the boycott on Mulan over Liu Yifei’s political stance. Still, Mulan director Niki Caro has shown support for the actress and revealed how impressed she was by the actress’ audition. 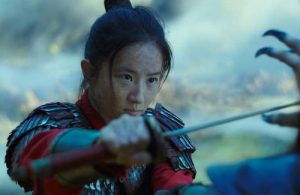 She revealed that Liu Yifei l immediately flew out to Los Angeles from Beijing right after receiving an invitation to audition. Without sleeping a wink due to time zone differences and a 14-hour flight, Liu Yifei dove headfirst into a two-hour audition. Liu Yifei acted out five scenes, and one of them had a script of five pages long, to which Niki reminded everyone that the actress’s native language is not English.

Right after the audition, Liu Yifei immediately went to do a one-hour physical test with a trainer. She did not complain nor ask for a break throughout the entire process. Niki emphasized that she was thoroughly impressed and described Liu Yifei as a warrior on set. She expressed that Liu Yifei is the best partner to work with on any project. “I think Liu Yifei is the best person for this role, not just because she is a talented actress, but because she is also a smart, strong, and gentle person,” Niki said.

With immense efforts and high anticipation for the classical remake, it would be ideal if Mulan could be released as expected. But due to the significant impact that the coronavirus has on the Chinese market and its cinema shutdowns, Mulan‘s release date might be postponed considering the number of losses. Besides that, with a PG-13 rating and the requirement of parental admission for those under 13, this can very well deter potential audiences and positive reviews.