Recently, Disney’s live-action remake of Mulan came under fire for working with the authorities in the Xinjiang province, where ethnic Uighurs and other Muslims have faced human rights abuse from the Chinese government. Soon after, China banned its media outlets from reporting on the newly released movie, which has been a box office flop in the country. Whether it is a plan to keep the Xinjiang detention camps under wraps or to promote its own domestically-produced animation film Kung Fu Mulan <木兰:横空出世>, which will premiere on October 3 to celebrate the National Day of the People’s Republic of China, there is no way of knowing. But what we do know is that the country is determined to present the world the most realistic portrayal of China and Mulan through its version of Mulan, as seen in the movie’s latest poster. 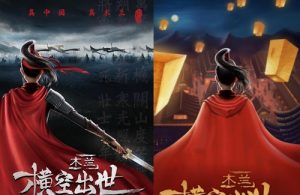 With the bold, fiery red tagline of “Real China, Real Mulan” dominating the top part of the poster, it displayed the Chinese production team’s confidence in conveying the true spirit of Mulan while also simultaneously alluding to Disney’s poor job on the Mulan remake. With the latest Mulan disappointing viewers, like many previous domestic and foreign films about Mulan have, Kung Fu Mulan could not have come at a better time.

Riding on the Mulan craze, the animated film, which has been in the works for the past five years and specially catered to the Chinese audience, is marketed as the most authentic storytelling of Mulan by carrying a rich and deep “Chinese flavor” that is familiar to the Chinese. It seeks to deliver a more profound message by focusing on illustrating the importance of three Confucian virtues, including loyalty, filial piety, and righteousness. Knowing that viewers want a story that is more than just about a girl who disguises as a guy, Kung Fu Mulan‘s sentimental storytelling of love and sacrifice for the country would surely evoke the patriotism of the Chinese audience when it premieres around China’s national public holiday.

Also, Mulan’s personality will not be the same as other adaptations, as they further innovated and developed her to be a more dimensional character. Striving to impress audiences, the team believes their new and authentic Mulan will bring moviegoers a refreshing feeling. If these selling points were carried out in the movie, it would just be a matter of time before Kung Fu Mulan overtakes Disney’s Mulan and become the hottest Chinese animation of the year.