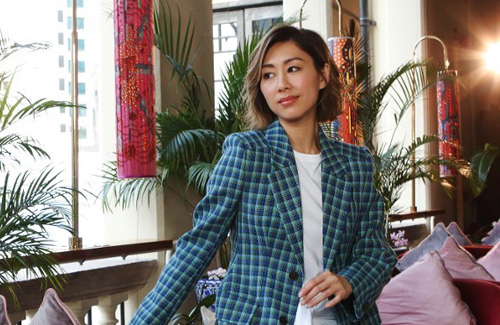 Two-time Best Actress winner Nancy Wu (胡定欣) went from constantly working to not filming any dramas in 2019. While many people thought Nancy stopped working, she was busy with filming movies and acting in stage plays. As Nancy reflects upon her career, she looks forward to new challenges and expanding opportunities beyond television work.

While there have been rumors that Nancy is contemplating ending her contract with TVB, her contract is not ending anytime soon, “Last year, I filmed Justice Bao: The First Year <包青天再起風雲> and then I went to act in stage plays. I really wanted to rest. In the previous years, I filmed The Holy Alliance <同盟> and Deep in the Realm of Conscience < 宮心計2深宮計> and I exerted myself too much. I want to rest and do other things, so fans aren’t seeing me as much on TV.”

Though Nancy revealed that she was supposed to film this year, the drama was delayed because production wanted to rework a few things. “Right now, I want to do my own things and learn how to make the most of my time to rest. However, I am ready to film at any time.”

After shooting dramas for 15 years, Nancy got a chance to star in the film Men on the Dragon <逆流大叔> and was nominated for Best Newcomer Award for her role. Nancy is thankful for the opportunities she was given, “I am very lucky to have this opportunity. Many people thought I was in movies before but this was the first time! It was Francis Ng (吳鎮宇) who sought me out and believed in me.”

As a newcomer in the film industry, Nancy observed, “Films and dramas have different ways of telling a story. I hope to shoot more movies and work with artistes that I never worked with before. I am still a newcomer in filming, but I am grateful that I can rely on 10 plus years of training.”

Working in stage plays allowed Nancy to fulfill her dreams in becoming a multi-talented artiste. “Movies and stage plays are new experiences. They are all part of the steps to learning. It’s been a long time since I felt nervous. It was a lot of pressure. I haven’t been feeling nervous when I filmed dramas, while the stress of acting on stage made me lose weight. There is a constant pressure and I give myself homework. My first time on stage, I had to learn the Chinese Kun Opera, the sleeve dance. I chose this. I wanted to challenge myself and I gave it my all.”

Even on the days that Nancy is acting, she would find ways to improve by learning to sing, dance and reading some self-improvement books. “Although I wasn’t in any dramas in 2019, but I was able to find ways to improve myself. At first I wasn’t used to the change, but having the time to rest is for the benefit of the future. I need to take care of my body.”