Despite the dating rumors that have been surrounding Kenneth Ma (馬國明) and Natalie Tong (唐詩詠), their good relationship remains unaffected. Recently, viewers got to see how alike Kenneth and Natalie were when they appeared as guests on the first two episodes of Yahoo’s Star Woo Battle <星Woo大戰>. Although the two were interviewed separately, Natalie and Kenneth’s minds were really in sync. 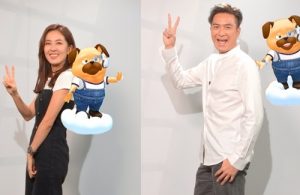 They both chatted with the animated “Yahwoo Dog” to reveal their inner thoughts. Kenneth showed off his silly and charming sides during a quick Q&A session in the first episode. When he had to choose between winning Best Actor and receiving a raise, he didn’t hesitate and picked the latter. It is likely because he already won Best Actor earlier this year. He also demonstrated his acting skills and showed how he would confess and reject a woman. Even “Yawhoo Dog” was impressed.

For the second episode, Natalie also answered some of the same questions as Kenneth, and their answers were almost identical. Who knew that their minds were so in sync? Perhaps that’s why Natalie named Kenneth as the best male travel companion. However, she pouted and said, “But he doesn’t talk.”

As for the best female travel companion, Natalie chose Priscilla Wong (黃翠如) because she hosts so many travel shows. In the episode, Natalie also revealed her love outlook and compared relationships to charging a phone.

“I need to cajole him and charge his battery a little, and then he’ll recharge my battery to the fullest! Men need to be coaxed!” Natalie said with a smile.