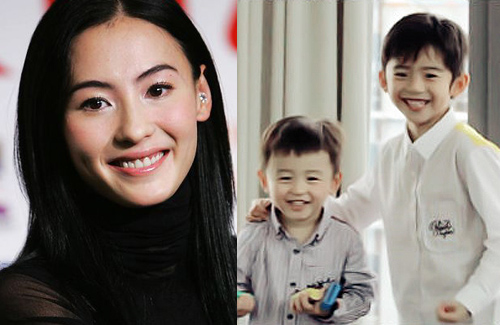 Since filing for divorce in mid-2011, Cecilia has been leading an exciting lifestyle filled with travels and adventures. She often took her sons, Lucas (謝振軒) and Quintus (謝振南), around the world, and was rumored to have immigrated with them to Canada over the summer. Although she had reportedly purchased property and even enrolled her children into local schools, Cecilia eventually returned to Hong Kong in October after striking a deal with Nicholas over terms that included residential properties and an unlimited alimony.

Meanwhile, Nicholas remained low profile in public, focusing instead on his burgeoning film production enterprise. He was briefly linked with Mainland star Zhou Xun (周迅), though the rumors were quickly quelled as Cecilia’s immigration spectacle took over the media spotlight. More recently, Nicholas and Hong Kong model Janice Man were spotted behaving intimately at a dinner party hosted by a mutual friend. Both have since denied the allegation but continue to refer to each other as a good friend. Some speculate that Janice had spread the rumors herself to take advantage of Nicholas’s fame.

Despite the gossips, Nicholas’s attention is fixated instead on his sons. On December 14, Nicholas was seen in Singapore, where Cecilia and their two children have been staying since early November. The family spent a fun day out at popular resort Sentosa. Dressed in colorful shorts and a form-fitting tank top, some believe that Cecilia may be trying to win her man back.

Even though fans are still hopeful about the couple’s reunion, Nicholas allegedly has no other intention than to spend time with his sons. Regardless of the truth behind his current dating status, Nicholas certainly already has his hands full juggling his private and professional lives while remaining on good terms with Cecilia, who continues to maintain majority custody of Lucas and Quintus.