Fifteen years after their previous collaboration Breaking News <大事件>, Nick Cheung (張家輝) and Richie Jen (任賢齊) reunite for the upcoming Bodies at Rest <沉默的證人>, directed by Die Hard 2 director Renny Harlin. On Christmas Eve, a band of thieves break into a morgue—not to steal evidence, but to steal a corpse.

Nick, who has directed a few films himself including The Trough <低壓槽>, said Harlin had directed Bodies at Rest with a “Hollywood filming style.” He also encouraged the actors to do more improv so the dialogue could flow more naturally, giving it a touch of the Hong Kong local flavor.

On how it felt to reunite with his old friend, Richie said Nick is an actor filled with the Hong Kong professional spirit. He recalled his time working with Nick for Breaking News, sharing that Nick often did his own stunts. “There was a scene with Nick that involved a car crash,” said Richie. “At first, I thought it was a stuntman, but when I took a closer look, I saw that it was Nick himself. I already admired Nick then.”

Although Nick plays a forensic pathologist in Bodies at Rest, he shared that he had to train for the film too. “Almost every actor gets beaten up by him,” said Nick.

“I play a thief, and towards the end of the film, I throw Nick onto a table and then kick him to the floor. I already mustered as much strength as I could, but Nick said I could give even more. He requested another take, because he wanted the audience to feel his pain. After so many years, he still hasn’t changed. This is why Hong Kong action films are so successful.”

Nick wouldn’t dare to compare himself to the likes of Jackie Chan (成龍), but he loves a good challenge. “Richie himself has this spirit too,” Nick praised.

Richie went in debt about his experiences with weight gain and weight loss for his new film Pao Ma <跑馬>, in which Richie plays a man who joins a marathon to lose weight.

He rapidly gained 26 kg for the role, becoming a man weighing over 200 pounds. He said, “When Nick shot Unbeatable <激戰> a few years ago, I saw how quickly he got in shape. It make me think that I should take on a similar role. I feel that should be my duty as an actor. That’s why I decided to take on the role for Pao Ma. I really wanted to try it out.”

Richie said gaining the weight was actually easier than losing the weight. He said with a laugh, “To put on that weight I ate to the point of vomiting. I had a professional controlling my diet, but even then I ended up having the ‘three highs’ (high blood lipids, high blood pressure, high blood sugar). I had to get supplements prescribed to me to maintain my health. On top of that, I had to maintain a strict gym schedule to put on even more muscle weight so I could look even larger. It’s a struggle.”

Nick, who completed transformed his body to play that of a professional boxer for Unbeatable, said he understands the pain. “It’s similar to what I had to go through. Once you decide to take on the training of hell, you can’t just rely on your trainers to succeed. If you’re not motivated, no amount of trainers can change you. In the end, it really depends on your perseverance. You need to have a lot of willpower to do something you dislike. Whether it’s controlling your diet and getting more fit, it’s all on you.”

The actor named singer Sam Hui (許冠傑) to be one of his biggest motivators when it came to transforming his body.

“Around the 70s to 80s, Sam Hui stopped dedicating most of his time in music. He decided to do some more films, and then it became the Leslie Cheung (張國榮) era of music. I clearly remember me as a kid, watching Aces Go Places <最佳拍檔>, and seeing the 30 something year old still managing to transform his body and building more muscle. It was very admirable. It was inspirational.” 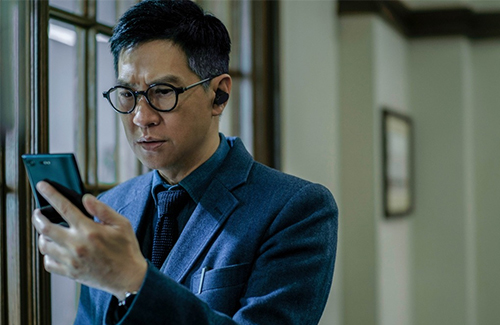