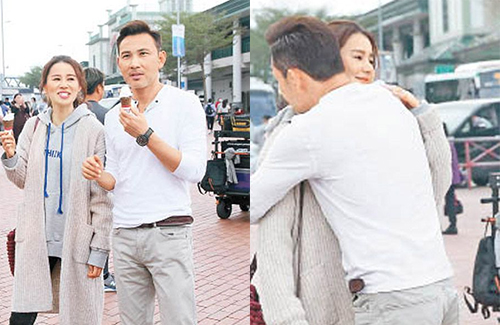 It only took one steamy bed scene for Frankie Lam (林文龍) and Priscilla Wong (黃翠如) to hit it off.

“We shot the scene a few days after filming started,” said Frankie. “It’s a good thing that we weren’t familiar with each other. The scene would be a lot harder to do if we’re close!”

The My Unfair Lady <不懂撒嬌的女人> actor said the two of them immediately struck a friendship after doing the bed scene together. Priscilla now likes to call Frankie as “Lung Yeh” (Master Lung) while Frankie likes to refer to Priscilla as “Siu Auntie.”

When asked about his thoughts on his costar, Frankie said, “She has a lot of opinions!”

Both Frankie and Priscilla were filming a scene together in Central on the day of the interview. After filming, Frankie treated the cast and crew to ice cream. Priscilla said, “As long as Lung Yeh is around, all of us will have lucky stomachs! (Does he always treat the crew?) He’s amazing! We would go to a restaurant and he’d just order anything on the menu!”

Asking if Priscilla’s husband, Edwin Siu (蕭正楠), has paid the set a visit, she said, “He did take me Tuen Mun earlier, and waited for me until I got off work.” As for Frankie, who is married to Kenix Kwok (郭可盈), he said, “It’s too far away from home. My wife would never!”

The drama also stars rookie actors Chloe So (蘇皓兒) and Kyle Li (李任燊). On working with newer actors, Frankie said, “They’re like a blank piece of paper. Everything is fresh and natural. There’s definitely fireworks happening.”

TAGS: Chloe So, Frankie Lam, Kyle Li, Priscilla Wong, To All the People I've Loved Before