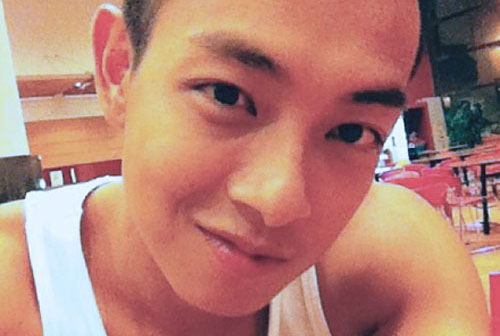 Will Young and Dangerous: Reloaded <古惑仔：江湖新秩序> be able to attain the former box office glory of the classic 1990s triad film franchise?  In the new Category III remake, producer Wong Jing (王晶) promises to increase the level of sex and violence, to provide a more gratifying ride for audiences.

In Young and Dangerous: Reloaded, Him Law (羅仲謙) will portray Ekin Cheng’s (鄭伊健) signature role, “Chan Ho Nam” and Oscar Leung (梁烈唯) will portray Jordan Chan’s (陳小春) previous role “Chicken”. Him and Oscar will be triad underlings in the first chapter of the remake. In the sequel, they will rise to become triad leaders.

The filming of Young and Dangerous: Reloaded officially commenced several days earlier. On his first day of work,  Oscar shot a bed scene with two hot models, which was his most explicit sex scene in his career to-date.

With his popularity and acting skills praised since TVB dramas, L’Escargot <缺宅男女> and Tiger Cubs <飛虎>, Oscar is one of the hot contenders to win the TVB Most Improved Male Artist Award. Oscar will be competing against Him Law and Edwin Siu (蕭正楠) for the award. Although Oscar wishes to win the award, he will not give himself unnecessary pressure.

With his foray in the film industry once again, increasing popularity among advertising vendors, and the opening of his own dim sum restaurant, Oscar has already achieved multiple breakthroughs this year.