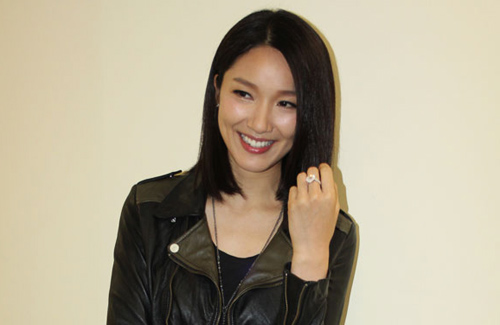 Leanne Li (李亞男) is eager to be Wong Cho Lam‘s (王祖藍) bride and has been waiting months for him to propose. When Cho Lam asked Leanne to marry him at the 48th TVB Anniversary Gala, she cried and became speechless with joy. Recalling the exciting moment, Leanne could not fall asleep the entire night.

“Last night was like a dream. I rewatched the myTV broadcast to relive the feelings! My body is very tired, but I didn’t want to fall asleep. It’ll take one week for my emotions to stabilize!” Leanne happily spoke to the press this morning.

After Cho Lam put the engagement ring on Leanne’s finger, she has been unwilling to take it off. “I went to sleep last night with the ring on. I want to remind myself every day that [Cho Lam] proposed to me, but I’m also afraid that I may lose the ring because of carelessness.”

While Cho Lam’s ring holds an impressive three-carat diamond, Leanne gushed, “Even if he proposed with a key chain ring, I would agree to marry him!”

However, Cho Lam and Leanne will focus on their careers for now and do not plan to have children immediately after getting married.

The couple is briefly separated for a few days as Cho Lam heads to Mainland China today to film for variety show, Running Man <奔跑吧, 兄弟>. Leanne said, “I didn’t want him to return to work so quickly, as I wish to continue celebrating with him. But he’ll spend my birthday with me. We’ll have a party at a friend’s house!” Leanne turns 30 years old on November 25.