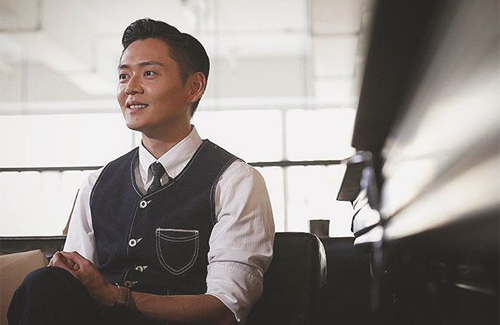 Owen Cheung (張振朗) has been heavily promoted by TVB these past few years. Despite onscreen opportunities, his luck always seems to run short. His dramas were blacklisted for a while because of his costar Jacqueline Wong‘s (黃心穎) scandal. Many thought his luck would turn when TVB finally aired Finding Her Voice <牛下女高音>, but the 32-year-old actor got injured by a suspended camera which fell on him while rehearsing for the TVB Anniversary Gala today.

While rehearsing for the show today, Owen was struck by the fallen camera and was immediately transported to St. Teresa’s Hospital for treatment. The doctor confirmed that his injury was minor and that he could continue his performance. During his waiting period, Owen was sitting next to a little girl and tried to comfort her by playing with her. When the girl grew scared of his advances and started crying, Owen felt extremely embarrassed.

In an interview afterward, Owen said, “I’m very happy to perform dancing for the first time. I’m representing the training class. Since that is also where I started, I’m very happy about it.”

Recently, protesters had discussed online to protest in front of TVB Studios on November 19, the day of the Anniversary show. To ensure that the show would air as planned, TVB recorded their artistes’ performances during today’s rehearsal for Cherish Hong Kong Entertainment, so footage is available for use during tomorrow’s broadcast if needed.