The Defected <鐵探> is Philip Keung’s (姜皓文) first TVB drama, and there is buzz for the HKFA winner to win this year’s TV King.

Playing an undercover cop with divided loyalties, Bingo was not an easy character for Philip to portray. “He’s a very gray character,” described Philip. “Quite mentally dysfunctional! Soon after graduating cadet school he was assigned to be an undercover. He’s had a pretty tragic life.”

Although Bingo was a difficult role to play, Philip enjoyed the challenge. “I feel that Bingo is the most complicated character on the show. Bingo is a combination of all the elements you see in the other characters. He’s difficult to portray, but I had a great time.” 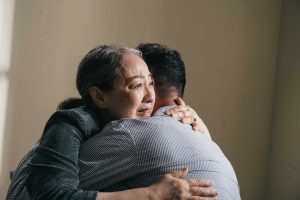 A huge story arc for Bingo involves his relationship with his mother, played by veteran actress Angelina Lo (盧宛茵). “I had so much fun with Madam Lo,” said Philip. “She really gives you that motherly and nourishing feeling when you’re acting with her. She plays a character with dementia, so she’s forgetting that she has a son. It’s hard life for her son. Her really loves his mother and wants his mother to remember him. That scene with Bingo and his mother reuniting worked so well because Madam Lo had caught the ball so smoothly, and she was able to kick it back to me with ease. It was a great scene to do with her!”

Bingo’s second story arc is with Kara Wai’s (惠英紅) Madam Man, his handler. Philip explained, “We have a complicated relationship. She is my boss and I am her subordinate. We have a very deep relationship, like that of a mentor and her student. But Madam Man is selfish. She is ruthless when it comes to getting what she wants, even to the point of sacrificing her own people.”

Bingo will go through a change of heart halfway through the storyline, but even so, his “initial heart” of being a righteous cop never changed.

As The Defected finishes up its first week of broadcast, many netizens couldn’t help but to compare Bingo with another iconic undercover character—Laughing Gor of The Academy <學警> series, played by Michael Tse (謝天華). Netizens have said that Bingo is a much more dimensional and complicated character than Laughing Gor, to which Philip replied, “Every actor has his or her own way of interpreting a character. Many viewers also have their own tastes, so I can’t say this one character has surpassed another character. There are definitely similarities between Bingo and Laughing Gor, but they are also two different people after all. Bingo is Bingo, and Laughing is Laughing. I love them both.”

As for whether or not Philip would film another TVB drama in the future, he said, “There is that possibility. When I come across a good script, I will not let it go. (Confident about competing for TV King?) Let’s think about that when the time comes, haha!”

Philip Keung in “The Defected”