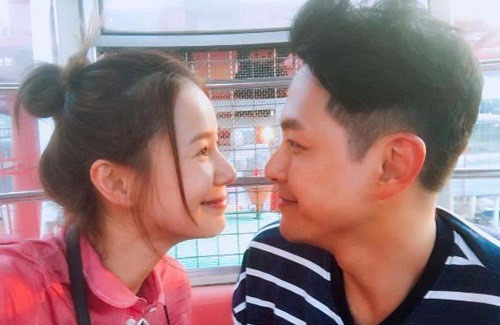 August wedding rumors between Priscilla Wong (黃翠如) and Edwin Siu (蕭正楠) have been going on for a while. In March, gossip mags reported that Edwin and Priscilla had plans to go on a vacation in August to register their marriage out of town. As Priscilla had just completed a variety show in Japan, and Edwin would finish the filming of his drama in late August, the timing seemed perfect. Reportedly, Priscilla and Edwin would go on a long vacation next year after their wedding reception, to spend time traveling and starting their family.

They have since denied the claims, of course. They explained that both of them were invited to do a feature for Carol Cheng’s (鄭裕玲) variety show DoDo Goes Shopping Again <Do姐再去Shopping>, in August, so a wedding would not be possible.

August wedding rumors started circulating again this week, but Priscilla was quick to deny the claims. She said, “I didn’t know about all these plans until I read the magazines. Thank you for your concerns! Both of us are very laid-back people, so having that many plans don’t really suit our lifestyle. Thank you to those who care about this more than us.”