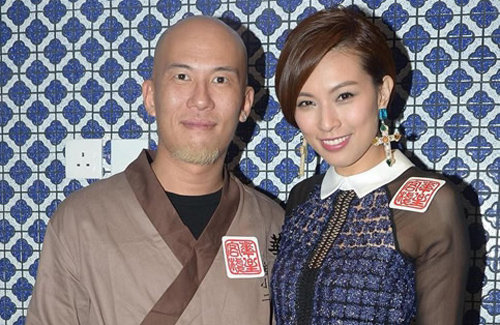 Dating for more than three years, Queenie Chu (朱慧敏) accepted boyfriend Eddie Pang‘s (彭懷安) proposal in February. After Eddie was photographed taking a woman home, tabloids accused him of infidelity. Eddie apologized publicly to Queenie on social media, and Queenie believes he did not cheat.

Eddie enjoys partying and frequenting night clubs. Despite past reports claiming Eddie’s infidelity, Queenie has always been trusting of Eddie. Recently, Eddie was spotted out shopping for wine with a busty, long-legged woman. Afterward, they went back to the woman’s house, where Eddie reportedly stayed overnight.

Queenie said “it was not the first time” Eddie has been spotted in ambiguous situations with women. Although there are photographs, Queenie said they may not represent the entire situation. “He’s really a good person.”

She trusts him and understands that sometimes he may act compulsively. “Sometimes he will think: “I want to see this woman home” or “I want to protect her”. So he goes ahead with the action, but to-date, I don’t find him to be disloyal to me.”

However, Queenie admitted that there are still problems they need to work out in their relationship. “Since we are talking about marriage, we need more time to mature due to our [different] values and how we get along with each other.”

The couple’s financial investments are closely intertwined. Last year, Queenie and Eddie opened a restaurant in the Central district of Hong Kong together. With Eddie’s successful experience in managing past restaurants, Queenie learned a lot from him regarding the daily operations. With their busy work schedules, the couple had originally planned to get married in 2016.

On Weibo, Eddie apologized to Queenie, “Even though we tell each other every time we go out and Queenie trusts me 100 percent, this is not the first time I have been photographed under circumstances that have embarrassed her. Queenie helped me explain [to the media] each time and it is a nuisance for her. Whether or not these reports are the entire truth, I have neglected to consider her standpoint and protect her. From now on, I will behave and do my best to avoid having Queenie feel unnecessarily troubled. I apologize for worrying our friends, but this apology is especially for Queenie.”