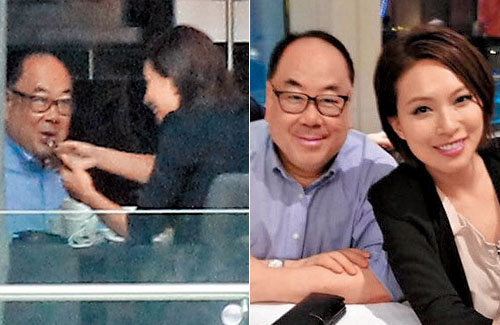 Queenie Chu’s (朱慧敏) love life became a top priority for the paparazzi after the former TVB actress broke up with Eddie Pang (彭懷安) in 2015. The ex-beauty queen, who left TVB in 2016, has been spotted going on several dates. She was first rumored to be dating a “little fresh meat”, which was then followed by the gossip that she was the third person that broke Daisy Ho’s (何超瓊) marriage to Ho Chi-kin (何志堅). Queenie has since denied both claims, clarifying that the former was her younger cousin, and the latter was just a friend.

In reality, Queenie probably has no time to date. Although no longer with TVB, the 36-year-old hasn’t gone a day without work. Busy with her own business and managing MC jobs, Queenie has to fly back and forth for her meetings.

But her dry spell may be breaking. A while ago, paparazzi spotted the 36-year-old at an opening ceremony with her assistant and a female friend. After enjoying their afternoon tea together, Queenie left the girls to meet up with an older, bespectacled man at a hotel restaurant. Paparazzi discovered that man is actually a college professor, and judging from his interaction with Queenie, they appear to be pretty good friends. Their conversation lasted until dinner.

Could this college professor be Queenie’s new love interest?

Stephen Wong Was Mugged in France